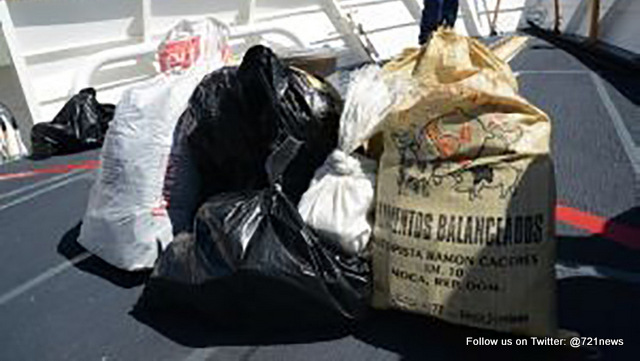 SAN JUAN, Puerto Rico, Sunday March 22, 2015, CMC – The United States Coast has transferred custody of three smugglers from the Dominican Republic and 466 pounds of cocaine to US Immigrations and Customs Enforcement (ICE) Special Agents here following an interdiction in the Caribbean Sea.

The interdiction off the coast of Aguadilla, Puerto Rico on Friday was the result of a multi-agency international law enforcement effort that also involved the Dominican Republic Navy .

The drug shipment was estimated to have a wholesale value of about US$7 million dollars, the Coast Guard said.

While on a routine patrol early Tuesday, the Coast Guard said a suspicious 20-foot boat was detected, travelling towards Puerto Rico.

The vessel, carrying three people with what appeared to be multiple bales of contraband onboard, was transiting without the use of navigational lights.

It’s reported that the passengers onboard proceeded to “jettison their cargo overboard.”

Shortly after, the three suspected smugglers were apprehended and the suspected drug shipment tested positive for cocaine.

Since January 2014, the Coast Guard has seized 15,671 kilograms of cocaine and 5,320 pounds of marijuana during 16 counter-drug interdictions as part of Operation Unified Resolve. It said the wholesale value for these seizures is worth more than US$524 million.
Read more: http://www.caribbean360.com/news/three-smugglers-us7-million-in-cocaine-seized-by-us-coast-guard-in-caribbean-sea#ixzz3VA7JBD6O