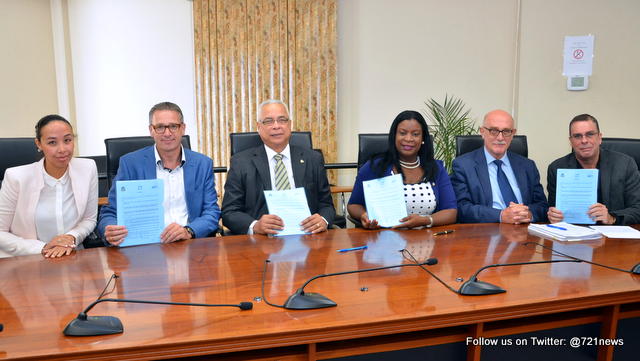 PHILIPSBURG, Sint Maarten – After an intense tripartite meeting between the minister of Public Health, Mrs. Rita Bourne-Gumbs, Director of SMMC Mr. Kees Klarenbeek and ad interim Director of SZV Mr. Glen Carty last week Thursday March 19th at the Westin regarding the hospital care in St. Maarten, a protocol between the three parties was signed to bond their cooperation intentions.

Prime Minister Gumbs opened the official meeting to sign the protocol on Thursday, March 26, and thanked everybody for their presence. With the signing of the protocol minister of VSA said she was looking forward to their future working relationship and their plan to work out a business plan for the improvement of the SMMC.  Mr. Carty thanked everybody behind the scenes who worked on the preparation of the tripartite as this brought the good spirit for the tripartite meeting last week, resulting in this protocol: “Everybody, advisors and lawyers behind the scenes worked together showing the cooperation that is needed for the future”.

Mr. Klarenbeek in his turn thanked everyone for the recognition of the situation; “I am glad that we are at the same page for looking for sustainable solutions for the healthcare on St.Maarten”.

The three parties signed the protocol, witnessed by the Prime Minister and the Minister of Finance. Ms. Luzz-Marie Tuitt as member of the council of SMMC, signed on behalf of Chair of the council Mr. Robert-Jan James.

On the signing of the protocol Mr. Carty also handed over a letter to SMMC stating SZV’s willingness to assist in the financial situation of SMMC.

Prime Minister Gumbs closed of the session with expressing his expectations of the follow up: “The three parties must realise the seriousness of signing this protocol.  The protocol states the development of the business case for the SMMC within three months and I expect that everyone will do their best, leave the past in the past and successfully realize the plans in this protocol on time. No more excuses”. The prime minister rooted for professional conversations and meetings between the three parties to resolve any execution hurdles together.