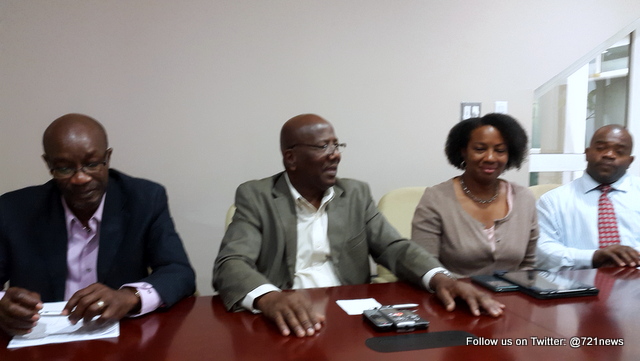 Story by Andrew Dick/ SXM News Room
PHILIPSBURG, Sint Maarten – “What were they ready for?” Said National Alliance (NA) Member of Parliament (MP) William Marlin who met with the press on Wednesday at the parliament building press room. The MP was joined by MP Silveria Jacobs, MP Christoph Emanuel and MP George Panthoplet.  Marlin was referring to the fact that the United Peoples (UP) led coalition has not presented a governing program after taking office 3 months ago.
During the 2014 elections UP campaigned under the slogan “we ready”. Marlin says what we’re they ready for, he further stated that the UP has proven time and time again that they are ready for themselves. The NA Faction leader also stated that on Wednesday morning MP Frans Richardson (USP) was on a radio program  Giving his support to the development of the rain forest project at the emilio wilson park. Marlin says it’s ironic how a party member of the USP Ruben Thomson stated on face book that he will chain him self to the emilio wilson park before he allows any development at emilio Wilson estate. This is a classic case of parties only working for self interest.
MP Silveria Jacobs in her adress to the press stressed that when the DP, NA and USP wanted to form government right after the elections it took 3 weeks to formulate the governing program however this present coalition is taking 3 months and the coalition members have diffrent priorities. Jacobs says this government is insulting the people on a daily basis by not indicating the way forward. She wants the UP led government to come out with the names of the two proposed ministers.
Outspoken MP Christoph Emanuel asked  What kind of government Is this? He believes Leadership is lacking. Emanuel was reffering to the non-response from the St Maarten Housing foundation after questions were sent to them by the MPS. Emanuel says How can you be in charge of the country and government owned foundation don’t answer. There are a number of issues affecting the country. The island is in a crisis. One man controlling St. Maarten and holding the country hostage.
MP George Pantophlet has an issue with the St. Maarten Carnival Development Foundation (SCDF). According to Pantophlet a 70 year woman held a booth for 19 years at the Village was denied a booth this year,. Without warning, but she was told that she could not get a booth because of hygiene reasons, what disturbs the MP is that SCDF did not put anything in writing.
The MP also wants to see the financial Statements for the previous years. An invitation is forthcoming for the foundation to come to parliament. Pantophlet said that the people of St. Maarten are suffering while politicians are pursuing their personal agendas. He said it’s clear to everyone that only one set of people benefiting from the economy. MP Pantophlet said after he spoke about the high fuel costs for months if not years it decreased somewhat but in less than one month the same fuel clause begin increasing rapidly. MP Pantophlet said he submitted a letter to the Minister of Economic Affairs asking some specific questions and so far he did not get a response from the Minister.  The Member of Parliament said that when the former government was in office an MOU was signed with SOAB for internal controls but as soon as the government changed that MOU was abandoned, basically they dismantled the department and the person who was working there was sent back to her former function.
Pantophlet said that during one of the central committee meetings they were told that two financial controllers left and to date the positions are not filled. These are some things the Minister of Finance will have to explain to parliament very soon. During the press conference the leader of the NA MP William Marlin Stated that the leadership of the NA will be up for grabs for the 2018 elections. A congress will select the new leader of the party.