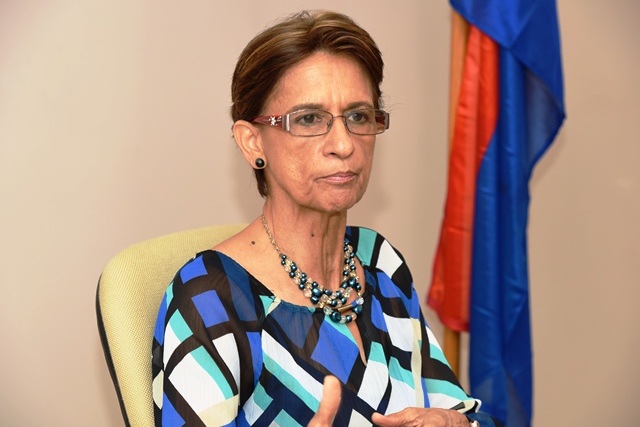 PHILIPSBURG, Sint Maarten — Sharing her thoughts on the annual Governor’s Speech to parliament, MP Wescot in parliament on Monday stated that with all the pomp and pageantry that will accompany the presentation by the Governor of St. Maarten, H.E Drs. E. B.Holiday, we must not forget that this presentation is done on behalf of the Council of Ministers of St. Maarten. It is also the COM that is accountable to the parliament for what is presented on its behalf.

In the view of the MP, “This year’s presentation by the Governor has a few peculiarities. For starters, the 2023 draft budget that should provide some financial details of government’s plans and intentions is nowhere in sight. In addition to that, after close to 2 years of working on the basis of the country reform package, we are told that the governing coalition has succeeded in expanded its base by adding 2 MPs to its governing program of 2020.”

“The base has not been broadened, it has shifted. Whether the final tally is 7, 8 or 9 MPs is anyone’s guess, as the original coalition agreement was not signed by all the current coalition MPs. Remarkable that in its remarks during the closing of the parliamentary year, the NA faction in parliament lashed out at independent MPs and advocated a change in the constitution and rules of order of parliament.”

“It would be interesting to know, what has been communicated to H. E. the Governor, as that too seems shrouded in secrecy. So with much interest, I await the new coalition agreement”, MP Wescot added.

If suddenly now the 2020 governing accord takes center stage, 2 pertinent questions are whether the work by the Temporary Work Organization (TWO) on the basis of the country reform package is still the lead process and what are the economic and financial priorities of this government.

“It looks more and more like the TWO organization is being pacified, just so the government ministers can continue on their solo trajectories. So of course we face capacity issues locally.”

MP Wescot further explained that in late 2020, the World Bank commissioned and delivered a so-called Public Expenditure Review of over 200 pages, covering the areas of Public Sector, Public Finance, Health, Social Protection and Education, all of these areas with commensurate immediate and medium term recommendations.

“I am not a proponent of the country package approach, but If anything the premise of the country reform package is one of cohesion of policies, and more preparatory work has already been done than the government cares to admit. Whether they are acting expediently on these proposals is another story altogether.”

So while the TWO and our local technocrats try to stick to the outlines of the country reform package and have already published several plans of approach in the different areas, such as public finance management, labor market, foreign workers, entrepreneurship and investment, foreign labor, gaming board etc., our ministers are acting out on their own whims, not even awaiting the Council of Ministers’ nod of approval in many cases. Let alone provide a financial paragraph for their “intended policies”.

“No wonder there is no haste with the draft amended 2022 budget or the draft 2023 budget, because the agreement of the country reform package is that identified reforms via the reform package MUST be included in the national budget, unless the Dutch government decides to participate in more or more reform projects.”

With all that is going on, it’s going to be interesting to hear what was devised by the government as their vision plan for the coming year during H. E. The Governor’s presentation on Tuesday.

“And again they get off the hook, because there is no financial accountability for this presentation and we are all expected to display some courtesy because of the conspicuous occasion”, MP Wescot concluded.