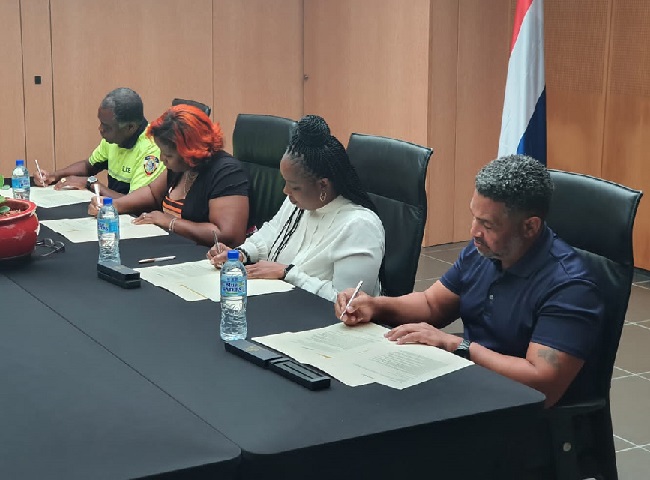 Philipsburg – After 12 years of labor insecurity in the field of law enforcement in St. Maarten, the Honorable Minister of Justice Anna E. Richardson and the labor unions, ABVO, represented by Mr. Sharlon Cathalina, the NAPB, represented by Mr. Rogerrel Mauricia and the WICSU-PSU, represented by Ms. Sharon Cangieter, signed an agreement on June 14th, 2022, on the Legal Position Regulation, compensation packages and benefits for the Police Force of Sint Maarten (KPSM), the National Detectives and Immigration officers, and further cooperation on personnel legal position issues. The regulation will now follow the necessary legislative trajectory for formal approval by the Council of Ministers. First, the content of the regulation will be reviewed by the Legal and Legislative Department, and then submitted to the Committee of Civil Servants Unions (CCSU) and the Council of Advice.

“I am truly happy for the personnel of the Ministry of Justice. It is a reality that for far too long personnel matters were not getting the required attention, and now as a team, we are making great strides. We aren’t done yet but the teamwork is paying off. The matters are being approached in phases. This achievement today, can be classified as phase two of regulating the Ministry’s personnel affairs and now we are on to the next milestone, all in the interest of those who have dedicated their lives to serve and protect Sint Maarten,” stated Minister Richardson.

The “Besluit Rechtspositie Korps Politie Sint Maarten” entered into force on October 10th, 2010, however, it could not be implemented due to the lack of a function book and the salary scales concerning police personnel. The Minister of Justice assured that the function book was approved by the Council of Ministers in December 2021. The regulation of 2010, did not cover all personnel with the status of police, as the personnel of the National Detectives of Sint Maarten was not included. The regulation also needed to be aligned with the structure of the police organization as redesigned after 2010 based on the Kingdom Law on Police. In addition to the recalculated salary scales to include the Windward Island allowance of 16.3% and the 3.2% of Cost of Living adjustment of 2012, the new regulation also includes a new chapter concerning the coverage of risks related to accidents and death in the line of duty.

“NAPB is content to have reached an agreement between the Minister of Justice and the various unions on behalf of the personnel of the Police Force, the National Detectives, Immigration and other justice agencies that fall under this regulation. We take this time to thank Minister Richardson for her commitment thus far on doing her best to end this long process. We would also like to thank our members for the patience and trust that they’ve instilled in us,” the Board of NAPB stated.

The final approval of the Legal Position Regulation for the Police of Sint Maarten within a short period by the Council of Ministers is the next milestone. The latter will make it possible for police personnel to be reimbursed for salary differences that exist since the salaries of police personnel were not adjusted in 2010. The then Minister of Justice paid an amount to police personnel, in anticipation of the adoption of a new legal status regulation, without settling tax, social security contributions and pension contributions. In anticipation of the completion of payment, Minister Richardson has already approved the implementation plan of the Police Salary Scales Advisory Committee to enable the remaining payments to police personnel by January 1st, 2023, at the latest. In the meantime, police personnel, including both police officers and support staff, will be placed in their new function as described and classified in the function book.

“We are very content with the signing of the covenant, which has certainly been labeled as a firm step in the finalization of the function book and the national decree legal position for police that took 12 years in the making. Furthermore, the Board of ABVO is very pleased and thankful for the input of the Honorable Minister of Justice and her cabinet. We look forward to the placement of all officers and administration workers in their right position and correct salary scales,” the Board of ABVO stated.

During the past few months, Minister Richardson has advanced in the development of policies with regard to the legal position of all employees of the Ministry of Justice. Recently, training and development projects were launched while personnel recruitment and selection for positions at the Immigration and Border Protection Services (IBPS), Customs, the Judicial Affairs Department, Staff Bureau and Victim Support Services are in progress. The draft policy for compensating staff members for being on call after working hours will soon be formalized, as well as the policy on disciplinary procedures and absence, and leave of absence.

“I’d like to express profound thanks to Consultant and Change Manager Alvin Daal who is appreciated for his knowledge, expertise and commitment in aiding the ministry and unions to progress forward and Acting Secretary-General Ligia Stella for her input, attention to detail and support. Both served as key players in the Ministry arriving at this milestone as we work to diligently have all personnel matters of the ministry finally regulated,” stated Minister Richardson.

The dialogue regarding the review of the legal position of Prison and Customs personnel will continue with the intent to have matters of interest completed soonest but at the latest in the year 2023. Unlike the police organizations, the legal position of personnel at these departments were in place in 2010 or shortly thereafter.

“We would like to congratulate the Minister and the members of the Justice Ministry on this major achievement.  It is twelve (12) years in the making. I would like to thank the members of the various departments that worked diligently on achieving this milestone. I applaud the members within the Justice Ministry for the patience they have exercised. We are seeing the light at the end of the tunnel. Thank you Minister Richardson for persevering even when the journey was rough at times. We appreciate and applaud the Minister for agreeing to the implementation of the agreement/ covenant. This document will enable us to be able to revisit the resolution and make any necessary amendments or additions within the next three years. The members of the other departments such as Customs, Court of Guardianship, and the House of Detention can be assured that we will work as diligently to rectify their position and salary by year 2023,” the Board of WICSU-PSU stated.

“As Minister of Justice, I hereby reaffirm my commitment to resolving the long-standing issues that the Ministry of Justice has been dealing with since Sint Maarten attained country status within the Kingdom of the Netherlands in 2010. The unions will be kept updated throughout the legislative process and on the legal placements that will take place. I look forward to continued collaboration with the unions in the best interest of all Justice personnel,” concluded Minister Richardson.