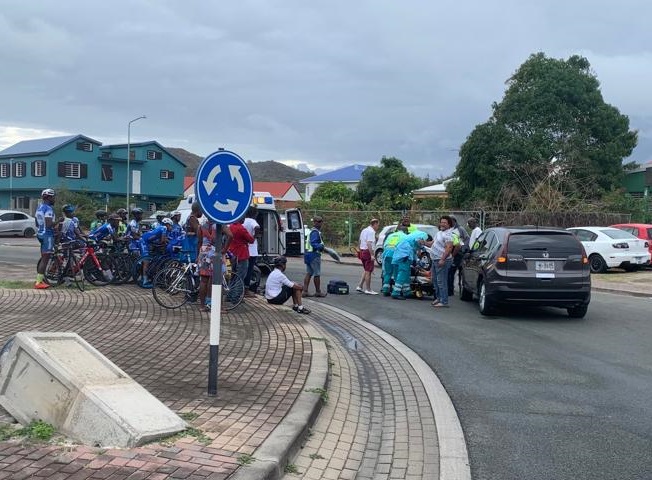 The serious traffic accidents involving motor vehicles and scooters/motorcycles continue to occur on the country’s roads. These past days have been no different much to the concern of the Police Force of Sint Maarten KPSM.

KPSM’s Traffic Department is investigating a collision which took place on May 7, 2022, around 9:40pm, at the corner of Richmond Drive and Union Road in which two people were injured.

The driver of a silver Infinity was making a left turn into Richmond Drive while being overtaken by a scooter coming from the same direction. The scooter rider and his passenger sustained injuries to their feet, knees and ankles in the crash. Both received first aid by the ambulance personnel at the scene, but refused further treatment preferring to go to the French side of the island for further medical treatment.

Another accident with injuries, this time on A.J.C Brouwers Road, was reported to police on May 7, 2022, at approximately 11:50pm.

Based on the preliminary investigation conducted by the traffic department, the driver of a black Yamaha Mio failed to yield the right of way to the driver of a Hyundai i10, which resulted in a serious accident. The drivers of both vehicles and the occupant of the I-10 suffered injuries in the accident. They received first aid from the ambulance personnel and were transferred to Sint Maarten Medical Center for further medical treatment.

The Traffic Department is investigating an incident from April 30 in which a cyclist was struck by a vehicle. It appears that the driver of a grey Honda CRV failed to give way to a group of cyclists at the Ta-Ta Roundabout on A.Th. Illidge Road. One cyclists was struck and sustained injuries on his hip. He received first aid from the ambulance personnel and was transferred to Sint Maarten Medical Center for further medical treatment.

Cyclists and motorists alike may take measures to keep the roadways safe. Everyone who uses the roads has a duty to drive safely. In addition to common sense, safety habits such as using electronic devices while driving or riding and avoiding alcohol and drug use.
The Traffic Department are investigating all three accidents.