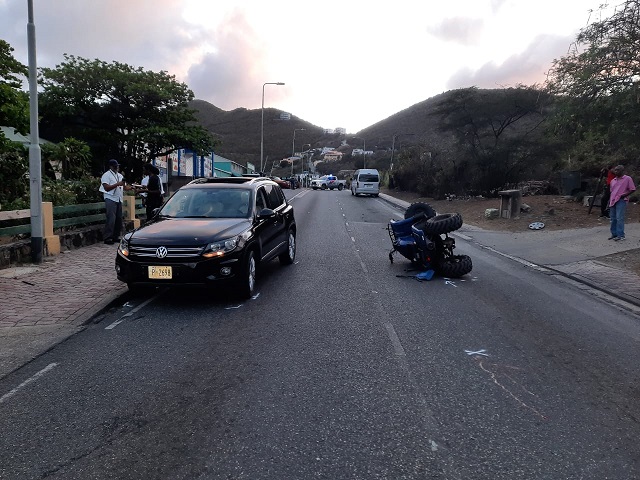 While the beaches were busy on the Easter weekend, there were also few road accidents that resulted in minor injuries. On April 15, 2022, at 6:00am, Police Central Dispatch received several reports of a traffic accident resulting in injuries on A.J.C Brouwers Road near Kooyman.

The driver of a four-wheeler was overtaking between several cars while going in the direction of Harold jack. At a given point the driver lost control and crashed into a Volkswagen SUV and then hit a Toyota van that was coming from the opposite direction.

The driver of the four-wheeler ended up falling whereby he suffered a head injury and was bleeding from both ears. The victim was later attended to by ambulance personnel who appeared on the scene.  While attempting to transport the victim to the SMMC, he jumped out and subsequently fled the scene. This accident is still investigating the matter.

Another incident took place on April 17, 2022 in the parking lot of Kimsha, where the driver of a Blue Hyundai venue was reversing at the same time as a pedestrian was crossing the parking lot and was thus struck by the vehicle.

The victim suffered injuries to her back and her lower left leg. She was given first aid by the ambulance personnel and later transported to SMMC. Her injuries were not life threatening. Traffic department are also busy with this incident

The police have arrested several individuals over the last few days in connection with commenting several punishable offenses. In all, three (3) persons were detained for committing domestic violence. Two (2) suspects were arrested by the police patrol in the course of a traffic control for being in possession of a false driving license.

Police Force of Sint Maarten (KPSM)is seeking assistance with locating the owner of a vehicle that was abandoned on Union Road.

Police is looking for the owner of the gray Mitsubishi that was discovered early this morning, April 19, 2022, on the Union Road. This vehicle which has no license plates and was discovered with the engine running and unattended.

Officers conducted a quick search in the area to find the owner of the vehicle, but were unsuccessful. Owner of the vehicle is requested to contact the Philipsburg Police Station at number 5422222 to retrieve this vehicle.