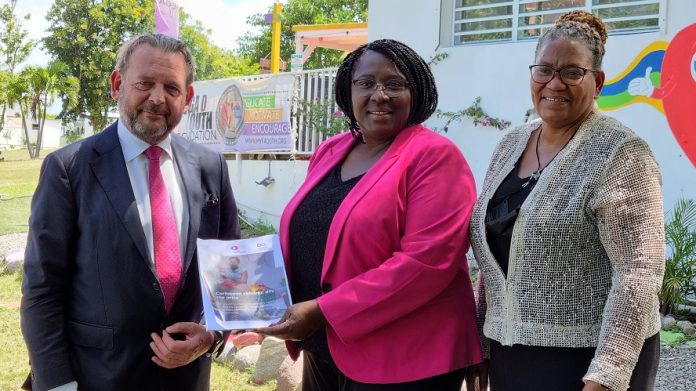 BES — Local and national government must propose long-term measures quickly On the 7th of April, the Dutch National Ombudsman Reinier van Zutphen, also acting on behalf of the Ombudsman for Children Margrite Kalverboer, presented the report ‘Caribbean children pay the price’ to Alida Francis, government commissioner of St. Eustatius. The State Secretary responsible, Alexandra Van Huffelen (Kingdom Relations and Digitisation) also received a copy. The report reveals the issues faced by single parents and children living in poverty in the Caribbean islands. It reiterates the call for a renewed focus and action by local and national government. The National Ombudsman, the Ombudsman for Children and other organizations have been drawing attention to this issue for a long time. But it remains an urgent problem, as is revealed by the interviews the ombudsmen and their researchers have held with single parents and their children.
Previous investigations looked at poverty among the elderly and young adults on Bonaire, St. Eustatius and Saba.

Improved cooperation
Despite the measures taken to tackle poverty on Bonaire, St. Eustatius and Saba, the National Ombudsman and the Ombudsman for Children still have concerns about young parents and their children who are growing up in poverty. This is why there is an urgent need for close cooperation between central government and the public bodies on the three islands. In this, the ombudsmen envisage a specific coordination role for the Ministry of the Interior and Kingdom Relations (BZK). This is not an easy task, given that numerous ministries and government and other organisations are involved. But structural and long-term efforts are required to beat poverty in the Caribbean Netherlands.

Significant differences between the Caribbean and European Netherlands
The ombudsmen feel that single parents and their children can rightfully expect the government to ensure they receive rapid and carefully-considered help in improving their situation. They must be able to build a stable future for themselves and their children. There are significant differences compared to the facilities and services available in the European Netherlands and a social minimum income needs to be established based on the actual cost of living on the islands. This can only be achieved through a better understanding of the problems on the ground.

Reinier van Zutphen, National Ombudsman: “It’s so important to ensure that single parents in the Caribbean Netherlands receive more than just money to help them. Along with their children, they have a right to see a rapid improvement in the facilities and services available. This will only be possible by means of improved cooperation between the different government authorities and organisations. Both in the European and Caribbean Netherlands.”

Consequences for the children
Poverty has a significant effect on the way children are brought up, especially if their parents are on their own. The interviews with parents and children and previous research have revealed that single parents lack the space they need to give their children care, love and attention. The parents are under pressure and stressed by all the (financial) problems they have to endure. These parents generally spend a lot of their time working, rather than at home. As a result, the children have less structure, fewer rules and limited support or attention.

Margrite Kalverboer, Ombudsman for Children: “When children grow up in poverty, they often experience a range of problems in different areas of life. This means that there is a significant risk of poverty being passed on to them and for it to continue down the generations. It is really important to break this pattern.”

Recommendations
Based on all the interviews and findings, the ombudsmen have the following recommendations for the State Secretary of BZK:
• Develop an integrated approach for (access to) facilities and services and ensure that it
includes a focus on and a strategy targeted at the children.
• Focus on providing more financial help and debt counselling and easily accessible legal
services
• Break the taboo on parenting support and make it available and accessible.
• Ensure that childcare is available free of charge.
• Offer affordable courses to enable (single) parents to continue to learn and develop.

Next steps
In November 2022, a conference is being organised in the Caribbean Netherlands. At it, the
ombudsmen and their colleagues from Curaçao and St. Maarten will continue their discussion on the wide-ranging effort to combat poverty.

Background
Bonaire, St. Eustatius and Saba have been special municipalities of the Netherlands since 2010. Together, they make up the Caribbean Netherlands. Since 2010, the National Ombudsman has been handling complaints about government bodies on the islands. Since 2012, he has also handled complaints about the local government authorities, otherwise known as the public bodies. The Ombudsman for Children has been handling complaints in the Caribbean Netherlands since 2011.