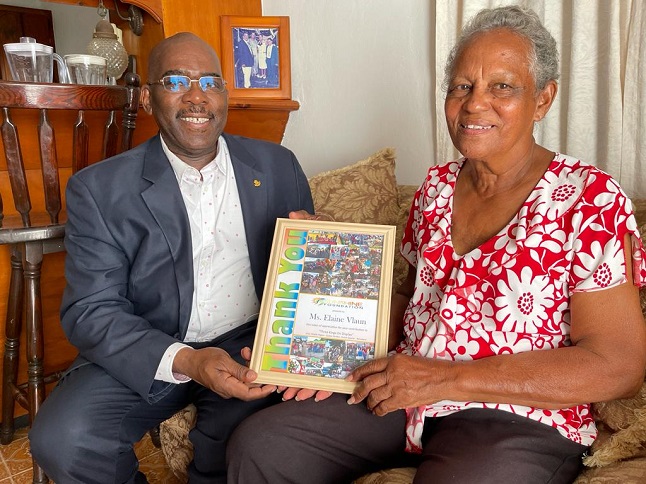 PHILIPSBURG – “As a developing country, Sint Maarten must continue to acknowledge the contributions of its local pioneers, past and present, that have laid the foundation on which we stand today. I would like to thank all persons involved from the Ministry of Education Culture Youth and Sport (MECYS) who have presented these important features thus far under the banner, “We Story” The Collection,” said Minister of Education Culture Youth & Sport, the Honorable drs. Rodolphe Samuel.

As Black History Month concludes the Ministry of Education Culture Youth and Sport (MECYS) continues it’s “We Story” The Collection, focusing on Mrs. Elaine Gumbs-Vlaun, who is an outstanding pioneer in the areas of sport, politics, social work and civil service while contributing to the community of Sint Maarten. Minister Samuel took some time from his busy schedule to visit Mrs Gumbs-Vlaun at her home to learn about her outstanding contributions.

Specifically in the sport of Volleyball in the 1970’s Mrs. Elaine Gumbs-Vlaun contributed as a player on the champions’ team, the national team and made world history in volleyball as the first female International Volleyball Referee Candidate after successfully completing the course at the Ohio State University.

Along with her contribution to the sporting world, Gumbs-Vlaun also pioneered in the political arena on Sint Maarten as the 1st Female Island Council Member. When the SPM appeared on the political scene in 1979 Gumbs-Vlaun made her entry into politics as the party’s third candidate. She picked up 141 votes in that Island Council election. However, it would not be until 1983, that Gumbs-Vlaun would be elected to the Island Council, making her the first woman to hold this post in Sint Maarten. She received 507 votes a hearty 35% of the parties total. In 1985 counsellor Gumbs-Vlaun debut in the parliamentary elections earned her 469 votes 28.5% of SPM’s 1646 votes. Gumbs-Vlaun participated in the elections of 1991 (211 votes), 1994 (188 votes) and 1995 (287 votes). In 1994, Councillor Gumbs-Vlaun, a member of the SPA since 1990, was appointed to the Executive Council by the second SPA/PDP coalition government. In November 1995, she was put in charge of the Central Committee. – (Book: Know Your Political History)

As an outstanding pioneer, Mrs. Gumbs-Vlaun was Sint Maarten’s first local social worker and she was instrumental in the start-up of the Department of Social Services. With more firsts under her belt Mrs. Elaine Gumbs Vlaun was also the 1st local to Head the Court of Guardianship and the 1st Sint Maartener to become Assistant Director of “Huize St. Josef” in Curacao. Huize St. Josef was setup as a home for abused and neglected youth for the islands of the Netherlands Antilles.

Additionally, her pioneering work extended to other areas, which led her to become one of the founding members of Safe Haven and the Mental Health Foundation. Along with Elsje Bosch she was instrumental in organizing a geriatric course geared towards persons working in the St. Martin’s Home for the elderly on Sint Maarten.

In conclusion, Minister Samuel stated, “Moving forward it is my goal to continue bringing about more awareness and increasing the visibility of the many facets of Sint Maarten’s rich and diverse heritage with “We Story” The Collection. As more feature stories are written they will be placed on the website of the Government of Sint Maarten at www.sintmaaten.gov/westory where all persons will have full access.”