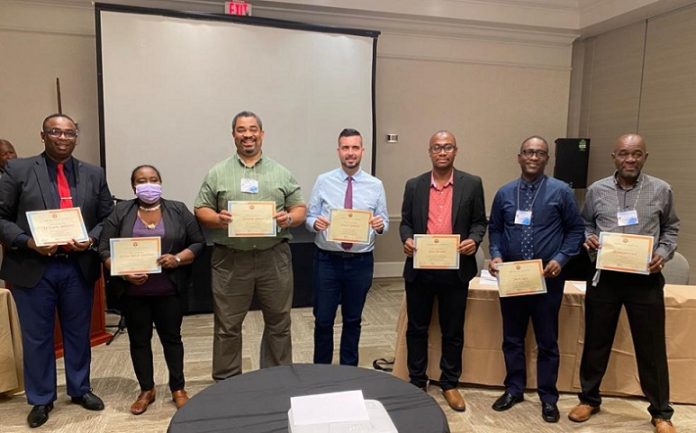 Formed in August 1, 1935, the Caribbean Union of Teachers (C.U.T.) is a federation of Teacher Trade Unions in the Caribbean that aims to impart knowledge and experience, while promoting and supporting the work of teachers and education across the region. The CUT acts as a collective voice for all its affiliate unions advocating on their behalf on all matters relating to education. The Caribbean Union of Teachers recognizes teachers as professionals who must work relentlessly to improve professional standards and show a commitment to students, community, and education, eliminating all forms of illiteracy while striving for a system that is just, respectful and equitable.

The theme of the conference was, “Educators: The key to development and recovery amidst current regional and global challenges.”

“Attending this conference was more than just being present for the union, it was about leaving a mark for our Union and our country and that was achieved,” Johnson stated.

He also represented the WITU at the “Status of Women’s Committee” under the theme, “CUT Women: Strategically poised, Embracing our Purpose, Overcoming our Challenges.”

Johnson made history by being elected to the office of the Third Vice-President of the CUT on February 11th, 2022. This top executive role is the first time in WITU’s history attending the conference that we were granted a position that will open endless opportunities for its members.

“I am humbled by this new role and will serve to the best of my abilities going forward with the unwavering support from fellow unions throughout the Caribbean,” Johnson added.

Johnson as The Third Vice-President will coordinate all sporting events of the CUT within its membership as one of the top decision-makers in the executive body. Additionally, the Third Vice President assumes responsibilities for all Social, Cultural, Welfare, and Benefits Services throughout the Caribbean region.

“Opening this new door of opportunity as the Third Vice-President of the CUT is about creating opportunities for others to take unionism to another level for St.Maarten,” Johnson said.

President Johnson will also serve on the steering committee of the CUT’s newly formed health and wellness committee. This committee is tasked with looking out for the phycological and social wellbeing of educators throughout the region.

Another major highlight of the conference was the approval of a Gender Policy that has the full support of the WITU.

The CUT Gender policy can prove useful in providing guidance to officers, employees, and committee leaders of the CUT and its affiliate Teacher Unions who are required to ensure compliance with provisions of legislation and regulations governing the education sector in the Caribbean region and in the participating countries. It also takes into consideration the requirements of national, regional, and international agreements, as well as the implications of the CUT’s planned policy actions on all teachers be they men, women, and Lesbian, Gay, Bisexual, Transgender, Queer, Intersex, and Asexual (LGBTQIA) persons who are active members of the CUT and its affiliate Teacher Unions.

While at the conference Johnson submitted and presented a three-year report of the WITU highlighting all of the various activities for the timeframe 2019 to 2021.

“I’m going to keep on fighting for the wellbeing of all our members, our rights as workers, and our beloved country, St. Maarten,” Johnson concluded.