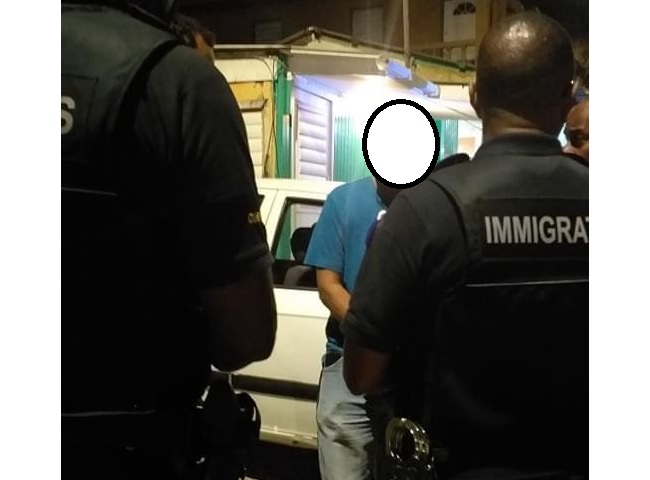 Open letter to the Minister of Justice, (VSA and TEATT)

Doing Controls and Raids are 2 different things. And you mentioned “there is an assumption that these ‘controls’ are aggressive”. There is no assumption that controls are aggressive if you have law enforcement officers who feel entitled to respect and because they wear a uniform they can treat people how they want. They don’t even talk to people with respect. This is something that has been going on for years, whenever there are new officers they just follow and that’s how there will never be a change.

Now you have the same law enforcement officers doing ‘controls’, wanting respect and compliance from businesses and individuals for the good work they are doing. Do these officers, who are doing the ‘controls’, drive around with a list of all the businesses who have been contacted? Or do they just walk in any establishment and start asking anybody for documents, also tourists? Because ‘controlling’ without an announcement or to put it differently a surprise attack, is a raid.

People contacting politicians they know to pull strings has been going on for years and decades, have you, Minister of Justice, never helped a friend, family member or anybody you know to get residence papers and giving them advice and/or loopholes to still get documents while others get turned down using the same tactics on their own? Does that not give ‘protection’ on a political front?

You also said that “those who are residing here, abroad, be it locally, regionally or international can now see what has contributed to our high unemployment numbers, poor tax compliances and a list of reasons why St. Maarten is struggling to thrive”.

Have you ever thought about the fact that a lot of people are undocumented because of the high turn down rate of residence applications by the immigration?

There are hundreds or thousands of people living on the Island based on family reunification, who are married to a foreigner and get a residence permit to live here but are not allowed to work. They are not fully undocumented but still can’t (help) provide for their families. They don’t have legal rights to work on the Island, but have so much different qualifications for so much different jobs.

If these partners/spouses want to work, they have to request a change of purpose and request a work permit. When they decide to leave this job, for whatever reason or they get fired, they have to request a change of purpose yet again. Not to mention the long waiting period to actually get a permit. That is an easy way of making money for government, but how does this help, as you mentioned “it is modern day slavery, because people are not being paid what they should be paid and not treated correctly. It is wrong and need to be addressed”.

What also needs to be addressed is that when all these people are allowed to work they will be paying taxes, they will actually be able to file a complaint against an employer/business for being ill-treated or underpaid.

When people decide to get divorced, separated or get sick and can’t take care of their families, but were never allowed to work because their purpose of residency is cohabitation or marriage, how do they get a job and have their documents in order? Because you don’t give people a residence permit without a work permit, but the work permits are declined if the person is on the Island. The same rule as for immigration. If you’re on the Island while a application is in process, your papers will get turned down.

Seeing that so much people lost their jobs and businesses after hurricane Irma in 2017 and people finally started to get back their houses and jobs, then the Covid-19 Pandemic came along.. People lost their jobs (again), salaries got cut, people got sick, businesses closed, etc. Now you have families in St. Maarten who are married but only one person in the household has papers to work, people get children but can’t get residence papers for their children because they don’t make enough money.

Everything is getting more and more expensive, groceries, house rent, people have school fees to pay and GEBE bills. The same people who are undocumented are still spending their money, that they worked hard for whether they are documented or undocumented, on the Island. When the guarantor of the person who is not allowed to work can’t take care of them anymore, for whatever reason, and/or they don’t earn or make the minimum annual amount that the immigration requires to approve a residence permit, they get declined.

Now you have someone legally living on the Island whose talents and qualifications are getting wasted, who can’t provide for their spouse and/or children and most likely have to leave or have to get documents (from their home country) just to request a work permit to get residence to take care of their families, which consists of spouses, children, parents and maybe other family members or loved ones.

People are getting gaps in between their residence papers, not only because there are people/businesses who claim they can help with the application (where people pay hundreds, sometimes thousands of dollars for) and never see or get a permit. Now, because of these gaps they have to start the process over, but been living here and have been registered, but there is no flexibility whatsoever, because they receive the same requirement list as a first time applicant. And when they are here for a few months undocumented they get turned down because they were here illegally. It takes waiting time, money an patience to request documents abroad as well as here in St. Maarten. If the previous requests or attempts are being considered, why are so much people still undocumented/illegal?

You are even turning down residence permits for directors because they are on the Island but all their other paperwork is in order. You have lost (a) court case(s) already against (a) director(s) in the Joint Court of Justice of Aruba, Curaçao, Sint Maarten and Bonaire, Sint Eustatius and Saba and you keep turning down papers for the same reason.

You can explain that employers don’t have to use minimum wage, but everybody knows they will. If you don’t have another choice than to work illegal or you are desperate because you have bills to pay and you need to eat.. Employers will abuse the desperation of a jobseeker just like how power is being abused by ministers and politicians..

They buy houses/land, they open businesses. All there is being looked at is ways to get more tourists, but tourist are not the only people who have to enjoy St. Maarten.
St. Maarten residents and foreigners open business for tourists to enjoy and entertain them and better themselves and their families, but the people who are actually “running” this country are getting treated poorly for even wanting to live here or do business here.

The people benefitting most from the (poor) state the Government/the Island is in are the politicians.

Because saying you’re doing what is best for the Island doesn’t bring you far if the people who are trying to make St. Maarten their home, only get the short end of the stick for doing the right thing by trying to get a residence permit. People are leaving their home country to try and come to make their life better in St. Maarten, but they are being robbed of a fair chance. If our St. Maarten residents can’t live here comfortably, how should tourists feel comfortable?

Suzy Down The Road
A Dutch Citizen within the Dutch Kingdom !