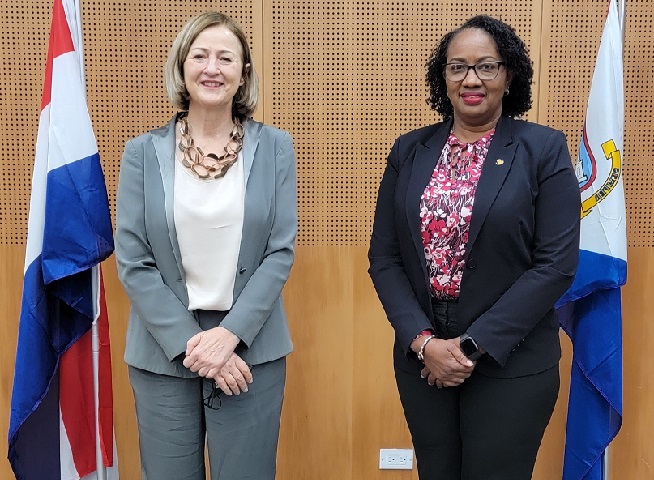 Philipsburg – On Monday, February 8, St. Maarten welcomed the Permanent Representative of the Kingdom of the Netherlands to the United Nations, Her Excellency Ambassador Joke Brandt for a two-day working visit. Ambassador Brandt who was accompanied by First Secretary Climate and Environment, Kavish Bisseswar, executed an extensive agenda that allowed her the opportunity to meet with government officials, the St. Maarten Youth Parliament and local artists. This working visit was planned by Ambassador Brandt in collaboration with the Department of Foreign Affairs to gain more knowledge and understanding of the specific needs and priorities for St. Maarten.

Prime Minister Silveria E. Jacobs stated, “We are pleased with the initiative taken by the Ambassador to travel to St. Maarten with her enthusiasm to ensure inclusive representation of the entire Kingdom, within the multilateral system of the United Nations. Through this visit, the Permanent Mission in New York will be able to accurately reflect, and further, the international objectives, and priorities, of St. Maarten within the UN system.”

On February 7, Ambassador Brandt paid a courtesy visit to His. Excellency Governor Eugene B. Holiday after which she participated in a meeting with Prime Minister Jacobs, her support staff and key personnel of the Department of Foreign Affairs. During the meeting, Prime Minister Jacobs relayed topics concerning St. Maarten’s position as a Small Island Developing State and the existing challenges faced, climate change and funding opportunities. During the evening, Ambassador Brandt also met with Minister of TEATT Roger Lawrence.

Ambassador Brandt stated, “I’m very happy with this two-day working visit. It ensures the representation of the Kingdom of the Netherlands at the UN is as inclusive as possible. It will allow me to represent St. Maarten and protect St. Maarten’s interests to the best of my abilities at the UN.”

Prime Minister Jacobs and Ambassador Brandt also attended a youth round table with the St. Maarten Youth Parliament at the Parliament meeting hall where the young participants expressed their vision on how best to achieve sustainable development on St. Maarten via the use of SDGs and promoted on a UN level.

At the farewell reception held last evening for Ambassador Brandt, the art of local artists Ruby Bute, Ras Mosera, Tim Dowling, Jonathan van Arneman and Lisandro Suriel were highlighted. During the event attended by His Execellency Governor Eugene B. Holiday, the Council of Ministers and Ministry of General Affairs Acting Secretary-General Emilia Thomas-Connor, Prime Minister Jacobs expressed how crucial it is as a Country, and Kingdom, to support the arts, as it is where the ideas and sentiments of our citizen’s manifest are found. She further stated, “it is imperative to support local artists on international platforms, and in doing so, represent the broad and diverse community that is the Kingdom of the Netherlands.”

“By working together, we can work towards building a sustainable, structurally resilient, and equitable future for all countries within the Kingdom. The Government of St. Maarten looks forward to close collaboration with the Permanent Mission of the Kingdom of the Netherlands to the United Nations, in supporting the priorities of St. Maarten, and the priorities of the other Kingdom countries, within the multilateral system of the United Nations,” concluded Prime Minister Jacobs.