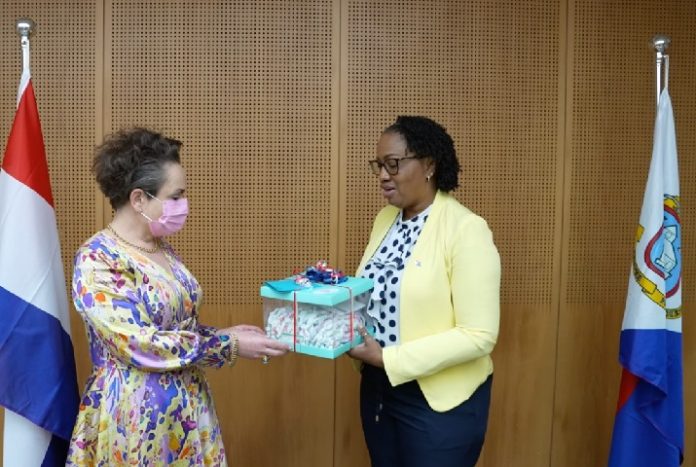 Philipsburg, Sint Maarten — Prime Minister of St. Maarten Silveria E. Jacobs hosted the new Dutch State Secretary of Kingdom Relations and Digitalization, Ms. Alexandra van Huffelen in her first in-person meetings during her introductory tour of St. Maarten today, Friday, February 18, 2022. The first meeting was held with the Prime Minister, followed by a meeting with the full Council of Ministers.

Throughout the three introductory meetings, a positive commitment was pledged for the realization of the desires and goals of St. Maarten based on equity while maintaining good communication and transparency, openness, building trust and an understanding of the realities on both sides including an understanding of what is/is not possible for both St. Maarten and the Netherlands. 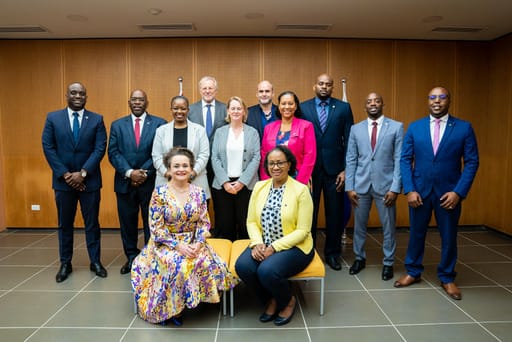 State Secretary Van Huffelen confirmed that the intention of the Kingdom Act COHO, currently executed by the Temporary Working Organization (TWO), is to render assistance which will continue not only in monetary form but in strengthening the basis for a more robust and resilient Government. A more cooperative relationship has been pledged for future Kingdom Relations and this includes addressing poverty, climate change, education and the environment.

Prime Minister Jacobs and her cabinet expressed the challenges that the Government of St. Maarten faces in terms of among others capacity of staff, the high cost of living, the difficulty of hiring persons due to the 12.5% cost cutting measures to increase capacity and the yearly threat of hurricanes compared to the rest of the Dutch Kingdom to State Secretary Van Huffelen. Prime Minister Jacobs informed that based on the above, an assessment should be done collaboratively, of the effects of the measures on the affected workers, to be able to decide on the best way forward regarding the temporary measures.

Updates, concerns and queries were provided by each Minister related to their respective ministry. Follow up discussions will continue with relevant Ministers as they join on the various aspects of the project tour with State Secretary Van Huffelen during her three-day visit. The work visit began with meetings today, followed by a tour of the Pointe Blanche prison with Prime Minister Jacobs and the Minister of Justice Anna E. Richardson. The tour will continue with a visit to other recovery projects on Saturday and Sunday. The introductory tour with State Secretary Van Huffelen will also include visits and meetings with various key stakeholders within the community.

“Today’s face-to-face meetings were enlightening, positive and a good start to continued respectful, equitable dialogue and negotiations in the days, weeks, months and years to come in Kingdom Relations,” Prime Minister Jacobs stated.