Minister Samuel in his presentation of recognition stated: “Now that you are here visiting for a few days, we have been reading about your success. I want you to know that you are an inspiration to many—especially the youth of Sint Maarten.

“Your ability to stay positive regardless the challenges. Staying focused and being disciplined are some of the messages we hear from you.

“Our very own. Denzel I would like to wish you continued success and continue to make yourself proud and, in doing so, also make us proud.

“So, on behalf of the Government of Sint Maarten, also on behalf of myself as Minister of Education Culture, Youth and Sport and specifically the Department of Sport.

“I hereby present to you this plaque to remind you that Sint Maarten appreciates you and stands with you as you move from success to success,” Minister of Sports Hon. Rodolphe Samuel concludes.

“After being named the 2021 Most Valuable Player of Dutch Baseball’s Hoofdklasse, the Department of Sports had a conversation with local baseball great, 28-year-old Denzel Richardson.

“In the conversation he spoke of his journey in baseball, his struggle with anxiety and how introspection has made him a better player and a better man.

“Denzel first signed with the Colorado Rockies minor league affiliate, at the age of 17 years. It was then that he began to understand the business of baseball and that although one’s performance may be good, opportunities may be few and far between.

“Infrequent play began to weigh heavily on his mind as he felt a constant pressure to perform – and not knowing how to cope, he became unpleasant to work with.

“After four years with the Rockies organization, and another year spent in an Independent League, Denzel decided to move to the Netherlands.

“Feeling distant, even ostracized from his team those first couple years, Denzel did something that would turn everything around – he asked the question, “what am I doing wrong?”

“The constructive criticism he received was humbling and Denzel began to actively work on himself.

“Learning to control what I can control, no longer trying to impress people and changing certain habits have made life much better and has restored my passion for baseball,” Denzel said.

“The two times Hoofdklasse Best Hitter, the 2021 Most Valuable Player and European Champion has crossed off several major milestones he set for himself and credits his parents, the late Marius and Edith Richardson as his driving force.

“Denzel with his newfound purpose, now mentors’ youth in the Netherlands as a mindset coach on being the very best versions of themselves and aims to do the same here on Sint Maarten.” 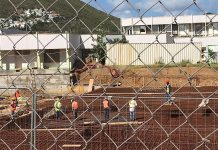