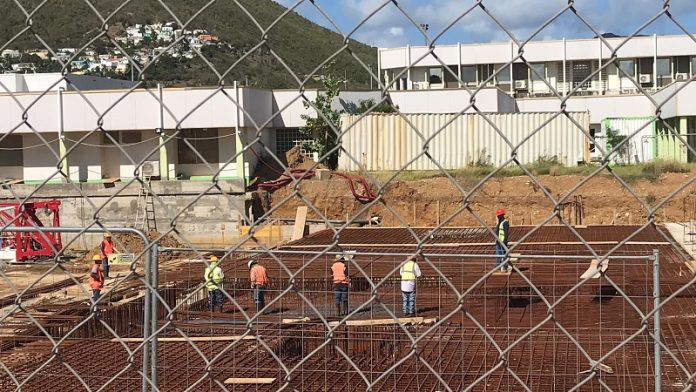 PHILIPSBURG, Sint Maarten — Independent Member of Parliament Christophe Emmanuel on Monday said that almost a month has gone by since he raised the alarm about ongoing construction of the St. Maarten General Hospital (SMGH) and to date, there remains no clarity just more questions.

“What is happening with the money for this project that’s meant to pay stakeholders and finish the project?” the MP asked after he personally visited the site on Monday and observed little to no work ongoing at the project site.

In December 2021 Emmanuel said it had been brought to his attention that something is amiss with the ongoing construction/expansion of the St. Maarten General Hospital (SMGH) and called on Minister of Health Omar Ottley to investigate the matter and inform the public accordingly.

“Since then, it has been the same excuse over and over from people involved in the project and the board of the St. Maarten Medical Center. Work on the project has come to a virtual standstill and what do we hear? There is trouble transferring money to the contractor and relevant sub-contractors. Really? Where is this money coming from? Siberia? North Korea? What is really going on at this project?” The MP asked.

Emmanuel said for the past few weeks little to no work has been executed at the project site, with key players in the project reportedly unhappy with the fact that they have not been paid. Reliable sources informed the MP that progress has been slow after a year since it commenced due to various changes with the company and the company not living up to its obligations.

One such obligation is the payment to the main contractor that reportedly hasn’t been paid for a time. The same goes for the local companies providing concrete and executing steel works and tiling. Allegedly, the company entrusted with the execution of the project FINSO (formerly INSO) has had internal issues maintaining finance personnel as well as challenges with banking on St. Maarten.

“There are too many grumblings that are starting to get louder and the progress after a full year seems stagnant,” MP Emmanuel said. “We can barely see any work ongoing at the site, even before the holidays. And just like the first (PJIA), here too we see little happening,” the MP said.

The MP would like to know if the project is delayed, when will it be completed and, if true, why are key players not paid on time? “Is it true the financial executive for the project resigned? Is it true that INSO is having problems at our banks with their accounts? What is the timeframe now for the completion of the project? What is the Steering Committee of the World Bank saying about all of this and the NRPB? Too much hiding going on and the government is not providing answers,” Emmanuel concluded.