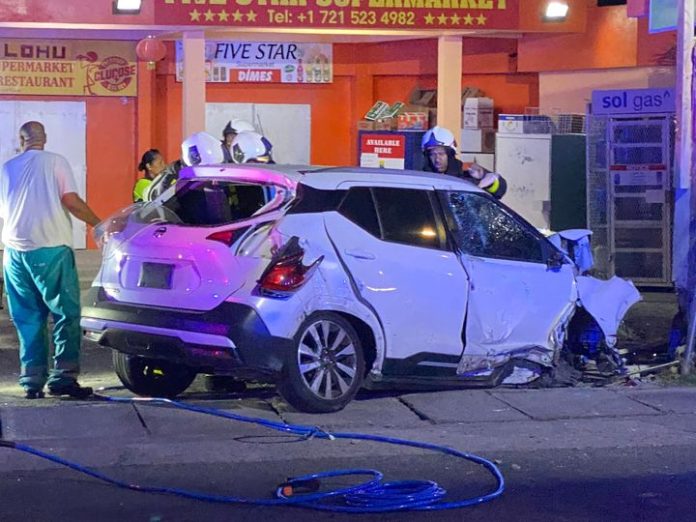 PHILIPSBURG, Sint Maarten — At approximately 1:30am on Tuesday, December 28, Police Central Dispatch received numerous calls of a vehicle crash on L.B. Scott Road in which three people were severely injured.

Several police patrols and paramedics were deployed to the crash scene.

Upon arrival the police patrol encountered a three people trapped in a white car. The patrol together with ambulance personnel were able to remove the rear passenger from the car.

The other passenger and the driver were later extricated from the car by the Fire Department. The two passengers are in critical condition and are being cared for at St. Maarten Medical Center.

The driver, however, showed no sign of life as he had succumbed to his severe injuries.
During the preliminary investigation, it was revealed that the driver, who was heading in the direction of St. Peters, was travelling at such a high speed that he lost control of the vehicle.

He struck the guardrail of the bridge and proceeded to go left and slammed head-on into a lottery office near the entrance of Meadowlands.

KPSM expresses condolences to the family and friends of the deceased D.A. Fenton

Police again warn drivers about their behavior in traffic. Since serious accidents keep happening and because of the severity of the damages caused may and  have  result in the death of persons using the public road.

Speeding
Speeding is the second most common cause of road accidents. Since cars, motorcycles and truck accidents that involve speeding typically occur at high speeds, it is also a major cause of serious or fatal road injuries.

Driving above the speed limit is a common practice for many motorists. In addition, illegal behavior vastly increases the risk of losing control of a vehicle and causing an accident
Even a small increase in speed can result in a much higher risk of being involved in a collision or other type of accident. As such, it is essential for motorists to be aware of the speed at which they are traveling and stay within the legal limits.

721news UPDATE:
Below is the list of victims’ names who lost their life in the traffic of St Maarten so far in 2021. We still have 3 days more to go before the year finishes.