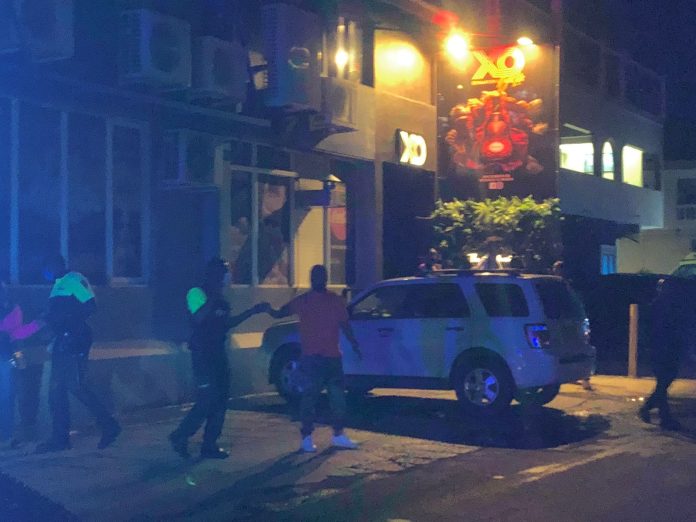 ~ Police in full force on the scene at XO Night Club ~

SIMPSON BAY — At approximately 11:30pm a shooting took place the XO Night Club above Pollos Hermanos restaurant. The venue was host for the night of a party touted as the Toxic Fantasy party. Unfortunately, for two of the party goers the night ended in toxic situation.

At the party an ex couple met up and started an argument with each other. What the cause of the argument or what it was about is unknown. At one point, the male partner shot the female – twice. According to bystanders, the woman was shot in her foot and in her side.

Police found bullet shells inside the club. How the gun was managed to be smuggled into the club is unknown as security was supposed to be exceptionally tight.

The time of this shooting was after 11 o’clock, Business Curfew time is set for 11pm. It should be noted that the party – in the words of an eye-witness – was blazing. Naturally, questions will be posed how it is possible for a party to be still ongoing well after curfew time.

The woman is said to be stable as was seen talking inside the ambulance as she was being attended to. The ambulance personnel decided to take her to the St. Maarten Medical Center – SMMC – even though she is a French St Martin resident.

Most likely she will be transported later to the French side hospital. However, for first aid to attend to her wounds, she was sent to the SMMC.

There is a lot of movements on the road. The roads are full with cars and people are still heading out to visit night life, most likely secret after parties. StMaarttenNews.com and 721news.com will be bringing you more news as it develops and reaches our newsdesk. At this time, a police spokesperson was not available for comment.

XO Night Club above Pollos Hermanos restaurant in Simpson Bay next to the airport runway.