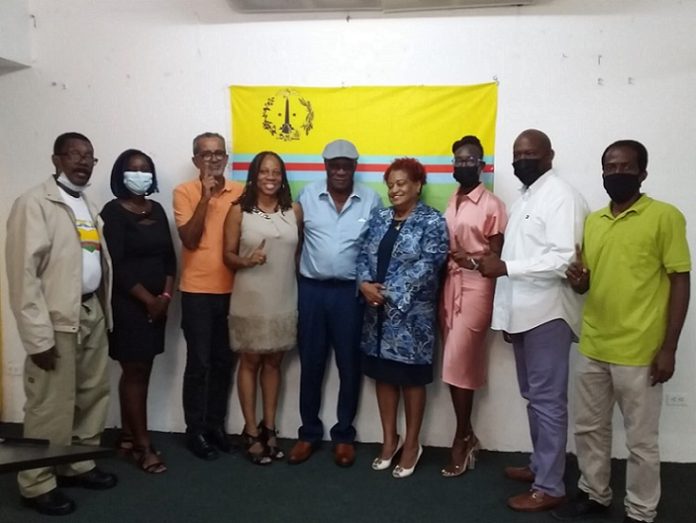 PHILIPSBURG, Sint Maarten — The One SXM Association held its official launch on Saturday, October 9 with a lecture entitled “The Role of the Airport in the Reconstruction of the Economy” given by Ms. Regina Labega. The ceremony also marked the first anniversary of the weekly radio program, named ONESXM which airs Saturdays from 5:00 – 7:00 p.m on My 88.3FM.

One of the objectives of the One SXM Association is “to be an advocate for social, cultural, educational, and economic advancement of the unified people of St. Martin, from both the North and South, regardless of the administration they fall under,” says the association.

The association also aims to promote unity, self-pride, self-reliance, dignity, patriotism, and self-determination and a return to the core values that are the foundation of the St. Martin nation, as well as promote good citizenship based on integrity, responsibility, and mutual cooperation.

After the introduction of the association and its members, the keynote address was delivered by Ms. Regina Labega, a senior policy advisor for the ministry of TEATT and former managing director of the Princess Juliana International Airport (SXM Airport). Ms. Labega also served as head of government’s tourism department and in a number of senior positions in the tourism and banking sectors.

In her four-part presentation, Labega outlined  how an airport, SXM in particular, drives the economy; events during the past two decades that impacted SXM Airport, and St. Martin’s economy; and opportunities for the airport and St. Martin. The last part of the presentation was a Q&A session.

Presenting a summary of economic benefits to the government, she urged the public to see the airport as more than just a terminal and a runway since airports offer many spinoff activities. Also covered in the presentation were economic impacts–global and local–Moody’s ratings, negotiations, and capital investments. On the matter of preclearance, Labega proposed a number of scenarios and said that the request for US preclearance had already been approved by the US government.

The ONESXM Association will soon publish more information about membership to the organization and its planned activities. The lecture series continues with the next lecture scheduled for November 6th.

Individuals and organizations are invited to join the Association’s mailing list for more information by going to their Facebook page www.facebook.com/onesxm and clicking signup or by signing up directly at ww.bit.ly/weareonesxm