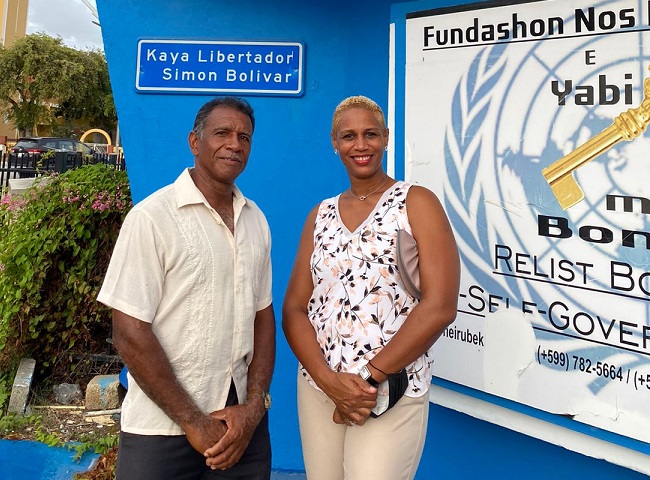 The Black Archives Amsterdam is a re-known institution that collects and archives information of the black culture and history. The recently in June published book “Amsterdam and the slavery-history” was send and presented on behalf of these organizations to us as appreciation and recognition of the works NKBB has been doing over the years of raising awareness, on the colonial and slavery history, and on the building of historical consciousness. Mr Luckhardt empathized and encouraged that we have all their support and that we continue doing what we doing.

The Maohi people and French Polynesia that got re-listed in 2013 under the UN NSGT as is the same trajectory that NKBB is working towards for the Bonaire peoples. As we voiced to the delegation the Bonaire people priority is not directly the global warming that could be happening on the long term, but our major threat is what is going on since 10-10-10, the
destitution, eradication of the Bonaire people making them a minority on their own island and erasing their culture and identity through settler-colonization. That should be the first campaign of the Greenpeace for the Bonaire people, to save the NATIVE Bonerians.

Recently the IPKO-meetings, that would normally take place in one of the Kingdom countries, Aruba Curacao St Maarten or Holland, this year due to Covid it that was held on Bonaire. During this period NKBB and BHRO got courtesy visit from Mr Endy Croes from Aruba, that will be part of the new government of Aruba.

In this meeting we updated Mr Croes on our progress of Bonaire United Nations trajectory and of the completion of the UN body investigation on Hollands atrocities and illegal annexation. Mr Croes re-assured and reinforced their commitment and support from Aruba towards the NKBB UN international trajectory for Bonaire.

As their government because of the Covid budget/financial issues with the COHO, and as they are an autonomous country in the Kingdom and they are in the Statuut, Kingdom Charter, they approached the UN Human Rights Geneva complaint procedure and mechanisms with an international lawyer to complaint for them by the CERD committee.

As they have working groups to work to have discussions with Holland and then has every four to five years the Netherlands will have to report on racial discrimination related issues to the CERD. Whereas we as Bonaire, have a different trajectory as we are not a country in the Kingdom, are not in the Statuut, but illegally annexed into the Dutch constitution and have no power, and have no-autonomy and our situation is different then the CAS islands.

We are also working with international UN advisors as was the case of French-Polynesia, to get re-listed on the UN NSGT and be directly protected by the UN GA charter. The Special Committee on Decolonization (C24) that has the authority to intervene and so does all the other UN organizations/institutions also can directly intervene and can deal with especially self-determination and self-governance issues and will have yearly review and reporting
of our situation instead of the CERD four to five years on racial discrimination issues.

The UN General Assembly can make resolutions on a yearly basis. For Bonaire is the only solution at hand through the UN as the C24 Committee was especially established to help islands as us, with the relationship with the administering colonizing powers as UK, France and Holland.