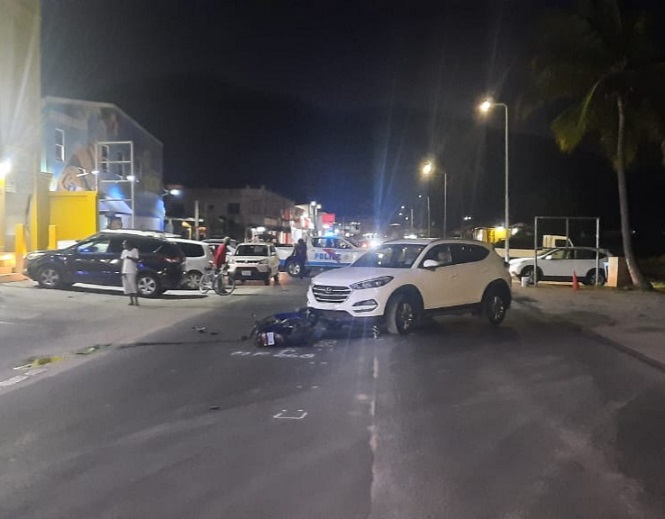 PHILIPSBURG, Sint Maarten (KPSM) — A scooter rider suffered a fracture of the right thigh after a collision on Nisbeth road yesterday afternoon. At approximately 06:30 pm on September 09, 2021, Central Dispatch received several call of a traffic accident involving a motorcyclist who was injured in what appeared to be a near head-on collision with a white SUV.

Following the preliminary inquiry, it appears that the driver of the white SUV which was at the side of the road was given an opportunity by other drivers to drive onto the road in order to head towards Salt Pickers Roundabout.

Meanwhile, a scooter rider was overtaking several vehicles from opposite direction and crashed head-on into the white SUV. The scooter rider was attended to by ambulance personnel at the scene and then transported to St. Maarten Medical Center for further medical treatment. His injuries are not life threatening.

The Police Force Sint Maarten continues to warn scooter, and motorcycle riders, motorist about their behavior in traffic, especially during the busy hours of the afternoon. Serious accidents keep happening and the severity of the damages has and may eventually again result in the death of the rider or someone around them.