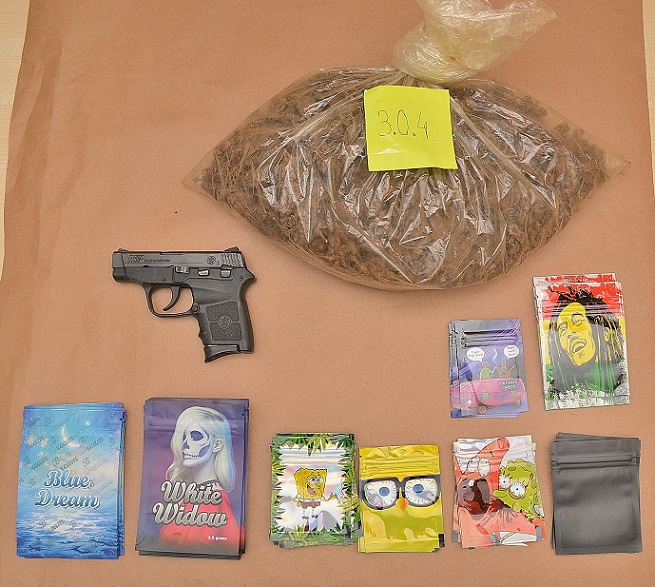 Suspect arrested for illegal firearm possession
A young man with initials R.A.G. was arrested by police for illegal firearm possession in Sucker Garden around 11:00am on Tuesday, June 1. Based on information obtained, the suspect was allegedly in possession of a firearm in his car, and in addition, had previously threatened someone with bodily harm. The suspect was spotted by police patrols in Sucker Garden and stopped with the permission of the Prosecutor’s Office.

A loaded firearm was found in the car search and confiscated by police. The suspect was arrested and transported to Philipsburg Police Station for further questioning by police.
The Police Force of St. Maarten KPSM has taken a hard stance on illegal firearm possession. Tackling firearm possession is of paramount importance to KPSM for the overall safety and security of the community and for KPSM officers who are on the frontline of community protection every day.

In cases of suspected firearm possession, police officers are trained to tackle the situation rapidly to prevent any escalation and possible harm to themselves, their team, and/or bystanders. The handling of the Sucker Garden incident was such a circumstance.

Alpha Team arrests three people for drugs and weapons smuggling
The Alpha Team arrested three suspects – S.B. (64), T.M. (30), and D.J.H.P (34) – on Tuesday in connection with an ongoing investigation into cross border drugs and weapon smuggling. The first two suspects were arrested early Tuesday morning for their involvement in a drug and weapons smuggling incident earlier the year. The third suspect D.J.H.P. was arrested later on Tuesday afternoon.

The residences of all three suspects were searched and various items were confiscated by police. All three suspects are held in the Philipsburg Police Station pending further investigation. Cross-border-related crimes include importation and exportation of illicit drugs, weapons, illegal money transportation, and other transnational crimes. The Alpha Team has arrested several suspects and has confiscated several weapons and drugs this year in cross-border cases.

The Alpha Team is a multidisciplinary team comprises the Police Force of Sint Maarten KPSM, the Customs Department, the Immigration Department, the Koninklijke Marechaussee, and the Dutch Caribbean Coastguard.

St. Maarten Police are busy recruiting new officers
The Sint Maarten Police Force is currently looking for proactive and talented professionals to join our team. The Police force os Sint Maarten is particularly inviting candidates (who are able to speak and write the Dutch language) who live in the Dutch Caribbean or who were born on the islands and are currently living in the Netherlands.

If you would like to be considered for a future position, you can download the application form from the police website, fill it out and send it by email to hrm-meldingen@policesxm.sx or werving.selectie@policesxm.sx with a motivation letter to the HRM department.