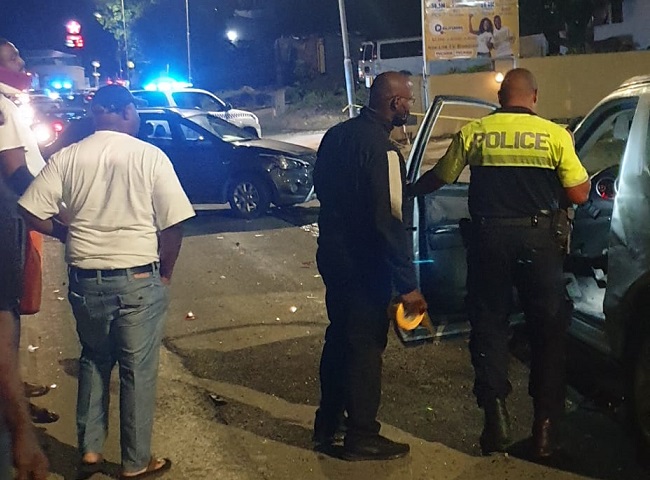 • A four-vehicle accident occurred on Saturday, June 12, 2021, around 11:35 pm.
Police Central Dispatch received several calls about a traffic accident with possible injuries on L.B.Scott Road in front of City Furniture. Several patrols and ambulance personnel were directed to the scene.
The preliminary investigation revealed that a two vehicle accidents had occurred within a few minutes of each other. A burgundy color SUV, heading towards St. Peters, attempted to turn into a side road next to City Furniture without giving way. Simultaneously, the other vehicle, a gold color SUV, was coming from St. Peters. The two vehicles collided into each other.

While the drivers of the two damaged vehicles were busy communicating with Police and roadside service, a silver jeep coming from St. Peters travelling at high rate of speed lost control and slammed into the rear of the gold-colored SUV in the initial accident. The gold-colored SUV skidded forward and struck a white pickup coming from the opposite direction.
The driver of the gray jeep suffered several cuts to his head. He was treated at the scene by ambulance personnel and then transported to St. Maarten Medical Center for further treatment. This four-vehicle accident is under investigation by Police Traffic Department. 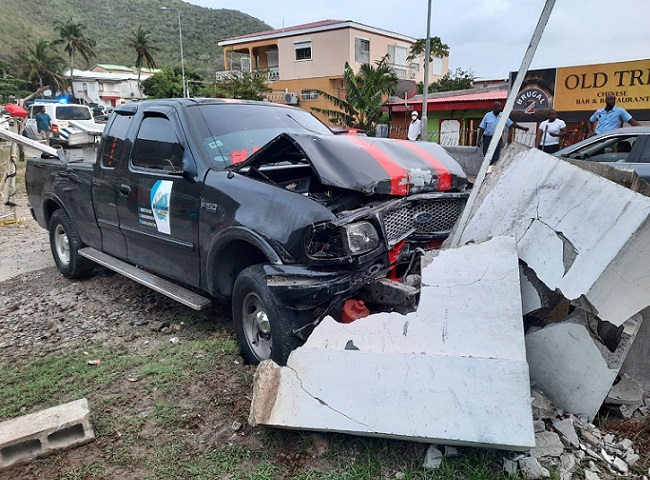 • On Monday, June 14, 2021 around 4:15 pm, several patrols were dispatched to the intersection of Manjack Drive and Union Road in Cole Bay due to an accident where the driver of a black pickup lost control of his vehicle and collided with the GEBE electrical box on the roadside. The driver suffered from minor injuries. The pickup was badly damaged. The investigation into the accident is still ongoing by police.