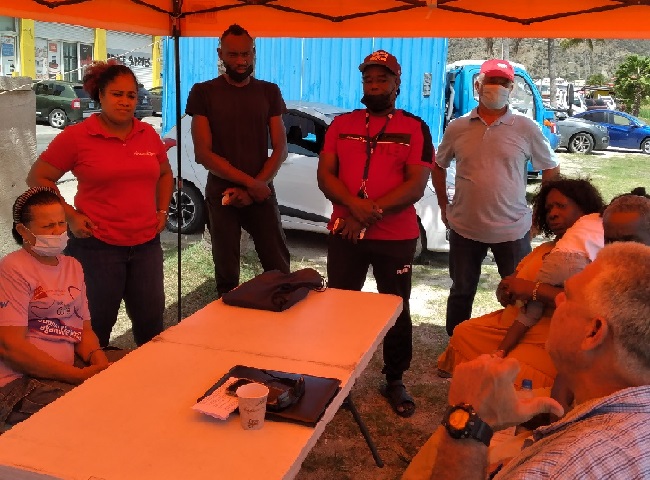 PHILIPSBURG, Sint Maarten — On Friday morning, Member of Parliament (MP) Claudius Buncamper, faction leader of the United St. Maarten Party (USP) in parliament, together with his faction staff Fernando Clark met with a number of vendors operating on the Ring Road side of the Walter Nisbeth Road.

During the meeting the vendors informed the MP that last April they were invited to a meeting with SG Miguel De Weever and Valya Pantophlet during which they were informed that they will be relocated to the festival Village on the tentative date of July 1st, after which they will no longer be permitted to operate from their present locations.

The vendors, who currently pay a yearly fee of Naf 1.200,= for their vending license, were granted permission to operate and conduct their business on several parcels of land on the Ring Road, which have been granted to individuals or entities. Once they are relocated to the Festival Village, the vendors are expected to pay a monthly fee of US$500,= which is due to increase to US$660,= and during the carnival season the amount levied will be increased to US$1.000,= per month.

“I cannot comprehend why such a move is being made in these difficult times, while we can have some discussions with the parties involved such as the land owners, the SOG and the vendors.” MP Buncamper wrote in a letter to the Ministers of TEATT and VROMI.

MP Buncamper, who has already spoken to the vendors, indicated in his letter that he will be approaching the landowners in an effort to seek their understanding of the situation and to allow the vendors to remain on the properties at least until the end of the year or when the local economy picks up again. The vendors have made some substantial investments in their businesses on which they depend for their daily living.

Some have invested in mobile food trucks, signage, seating arrangements, renovations and improvements to their locations, with the approval of or under the watchful eye of the government. One vender, who has been at her location for some 30 years, wonders why she was never granted the opportunity to own a parcel of land on the Ring Road.

Following his meeting with he vendors, MP Buncamper forwarded a letter to the Minister of TEATT, Ludmilla De Weever and the Minister of VROMI, Egbert Doran enquiring if it is the landowners who requested that the vendors be moved and, if so, were specific reasons given?

The MP also questioned how many vendors are currently operating on properties granted by government to other parties. Does the government deem it fair to relocate the vendors from their current locations where they pay Naf 100,- per month to a location controlled by SOG for US$ 500,- per month?

In his letter to the ministers, the MP asked if there is an agreement between SOG and the government regarding the granting of the locations to the vendors at a cost nine times higher than what they are currently paying. The MP wonders if the vendors will be compensated for their investments made to the properties they now occupy, and if so, by whom.

MP Buncamper also questioned why government continued to issue yearly permits to the vendors, while the properties on which they operate have already been given to other parties since 2015 and 2017, and if government has any other parcels of land on the Walter Nisbeth Road where a tentative vendors village can be created within a price range that the vendors can afford.