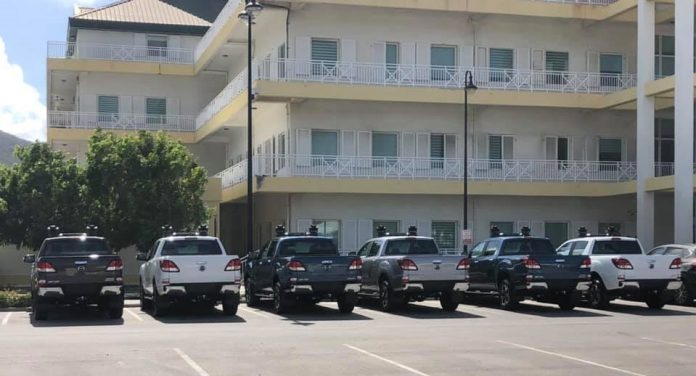 Philipsburg – The Government of St. Maarten has received the first batch of requested vehicles under the Emergency Recovery Program 1 of the Sint Maarten Trust Fund. The vehicles were procured by the National Recovery Program Bureau (NRPB). The vehicles, many of which are replacing stock damaged during the passing of Hurricane Irma, will be used by the different ministries for various operational government services.

Amongst the procured items are four ambulances, three fire trucks, one thirty-seater bus and ten command vehicles for the Ambulance and Fire Department. In addition, several fieldwork vehicles have been procured, including 34 SUVs, 17 pick-up trucks and three mini-busses (two regular and one protocol). Two crane trucks have also been ordered for the Ministry of VROMI.

Prime Minister and Minister of General Affairs Silveria Jacobs has expressed her enthusiasm for the arrival of the first vehicles to the government administration building. She stated, “Both from a disaster management and preparedness perspective and executing day-to-day activities of the various departments, these vehicles will aid us in being more efficient as a government apparatus. These vehicles could not be timelier with the upcoming hurricane season.” As the vehicles have been financed through the Trust Fund, the government’s budget has not been affected.

The first batch of vehicles has already started to arrive and have been handed over to Facilities Management. The remainder of the vehicles will be delivered as they become available in the next few months.