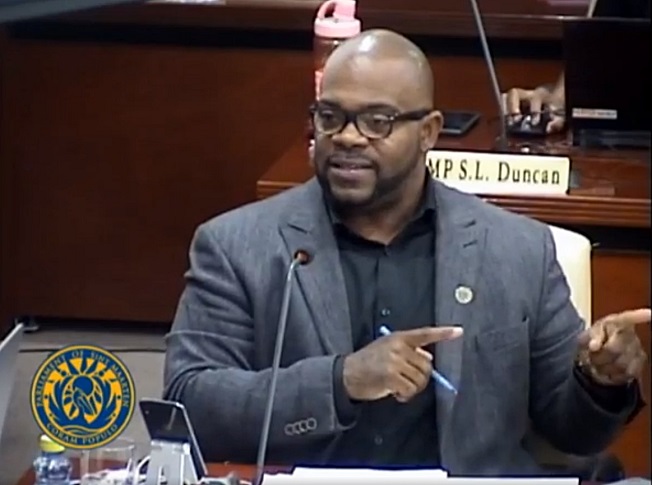 PHILIPSBURG, Sint Maarten — Independent Member of Parliament Christophe Emmanuel on Sunday once again urged Prime Minister Silveria Jacobs to “let Schiphol go” and not accept the indignity of having her entire country bow down to an institution like Schiphol. The MP said if there was any time the PM would have his support on anything, “this would be it. Do not bend your knee to another entity. Let the airport holding company lead the way and do their job.”

The MP, who has been urging government for the last few months not to renew the cooperation agreement with Schiphol Airport, said that Schiphol has been strategically placed as the new bully to blackmail St. Maarten into getting what it wants. He said State Secretary Knops and BZK have remained purposely quiet, while allowing Schiphol to be the bully.

The MP said that Schiphol’s latest letter dated May 6 is an insult in a long line of insults towards St. Maarten and not acting is good faith. He explained that Schiphol is trying to re-negotiate the cooperation agreement fully with terms that are not advantageous to St. Maarten. Including, but not limited to, not wanting an ending date stipulated in the agreement. The airport holding company (PJIAH) proposes that the end of the agreement coincides with the termination of the airport terminal reconstruction project for which Schiphol is involved.

“Why do they want to be involved after that date? So they want to be able to control St. Maarten’s most strategic asset forever and by extension give Holland a tighter grip over the country,” Emmanuel said. He added that Schiphol, in re-negotiating a “Cooperation Agreement”, has designated many aspects of the agreement as “non-gotiable”, keeping right in line with Knops and his “non-negotiable” positions.

“Here we have an entity with little to no progress on the island for the past two years, telling the country that things are non-negotiable? That alone should be enough grounds to cut them loose once and for all,” Emmanuel said. The MP also reminded PJIAH not to allow Schiphol to burden the airport with exorbitant costs related to the Schiphol/BZK appointed Chief Financial Officer and other consultants/employees of Schiphol. Because of that and more, Schiphol is uncomfortable dealing with PJIAH and wants to see that board sidelined or changed.

“Knops know full well that with the questions surrounding COHO and the three laws regulating reforms and income cuts being challenged by St. Maarten’s Ombudsman with the Constitutional Court, he cannot again blackmail St. Maarten after St. Maarten foolishly signed agreements and gave in to all of his demands,” Emmanuel said. “Instead, he holds back liquidity support and let Schiphol indirectly use it to try and get what it wants from St. Maarten, when liquidity and the Schiphol agreement has nothing to do with each other,” Emmanuel added.

The MP said the Prime Minister must by now realize the cartel like structure she is up against with Knops, BZK, Schiphol and “apparently the World Bank and EIB.” The question is, he continued, “what will she do about it?” He also questioned what St. Maarten’s representative on the Trust Fund Steering Committee Marcel Gumbs is actually doing for St. Maarten as the World Bank is sitting back and letting Schiphol conduct re-negotiations of the Cooperation Agreement using the same heavy-handed methods as the Dutch government.