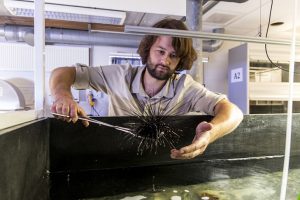 At Van Hall Larenstein University of Applied Sciences (HVHL) in Leeuwarden, the sea urchin Diademaantillarum has been cultivated to help restore the coral reefs around Saba and St. Eustatius (Caribbean Netherlands).
The first young urchins bred in Leeuwarden were released on March 24th to the Rotterdam Zoo (Diergaarde Blijdorp).

The ultimate goal is to also breed this species on Saba in order to give the sea urchin populations there a helping hand. These sea urchins keep algae growth under control, giving corals more room to grow. During this project, researchers worked closely with students from the Coastal and Marine Management program.

Diadema antillarum sea urchins were the main grazers of Caribbean coral reefs until over 95% of sea urchins were killed by an unknown disease in 1983. Without sea urchins grazing, algae became the dominant group on the coral reef, outcompeting coral. Today, nearly 40 years after their mass death, sea urchins have still not recovered. HVHL is working with the RAAK PRO Diadema project (2019-2023) along with project partners for the restoration of this species on Saba and St. Eustatius (Caribbean Netherlands).

For the past 40 years, researchers have been trying to breed Diadema in captivity, but unfortunately have only had limited success. Breeding as been found to be very difficult. Larvae of this type of sea urchin float along sea currents for the first 50 days of their life and are sensitive to water quality and nutrient availability. However, in 2020 researchers and students from HVHL in Leeuwarden managed to develop a method for stable and consistent breeding of young Diadema.

It is difficult to transport these animals on a large scale to Saba or St. Eustatius, so the first group of young urchins will find a nice new home in the Rotterdam Zoo starting on March 24th. The next step will be to breed urchins on Saba so that they can be released into the wild, strengthening the populations and helping to restore the coral reef.