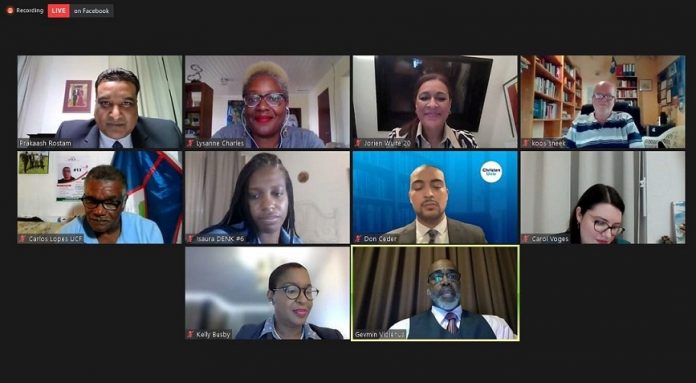 The purpose of this debate was not only to offer a platform for the candidates to inform the voters of the party programs and visions, but more so to encourage voters hailing from the Caribbean and South American diaspora in the Netherlands to go out and vote.
Statistics over the past years have shown a relatively low voter turnout amongst this specific group of voters.

Minister Violenus, the host of the debate, in his welcome remarks to the candidates and the viewing public emphasized the importance of voter’s participation in the elections of March 17th and the urgency of having persons from the diaspora elected to the Second Chamber. This, the Minister stated would be an added value to the legislative decision making affecting the diaspora and the islands.

The themes debated centered around, the effects of climate change on the Caribbean islands, education and equal opportunities for students from the islands participating in educational programs, and of course Kingdom Relations and the current challenges we face as a result of democratic deficit.

The Parliamentary elections will be held on 17th of March, however on Monday March 15 and Tuesday March 16 polling stations will be open to afford the elderly and persons belonging to the at-risk categories the opportunity to cast their votes. The government of the Netherlands has also introduced the option to vote by mail for persons above the age of 70. The voting process will end on Wednesday March 17th, 2021 at 21.00 hrs.

March 30th will be the last parliamentary date for the sitting Second Chamber. The new Parliamentarians are expected to take office on April 2nd, 2021.