PHILIPSBURG, Sint Maarten — NV GEBE stated in a press release that one of the company’s priority in 2021 is to ensure Street Lights repair throughout various districts on the Dutch Side of St. Maarten.

NV GEBE stated that prior to hurricane IRMA the amount of street lights installed were a little over 4000.  After the passing of IRMA a survey was done and only 1700 street lights survived the devastation. Currently NV GEBE has restored approximately 1800 street lights with the remaining to be completed in 2021. Due to budget constraints this process has taken longer than projected. In 2020, even during the COVID period, NV GEBE has installed and or replaced over 800 street lights.

Based on the Streetlight Management Agreement, NV GEBE has been replacing the old High Pressure Sodium (HPS), orange lighting, light fixtures for more reliable, energy efficient and resilient streetlights which house the Light Emitting Diode (LED) components. In order to complete the streetlight network, a management system has been acquired (still in test phase) to be able to monitor the components.

This management system can control and monitor the streetlights on:
Switching the lights On & Off, reading/monitoring the consumption of the lights, receiving alarms when a street light malfunctions (not lighting or staying on) and the system has the capability to be used for lighting of emergency routes.

NV GEBE and NRBP (local World Bank representatives) are currently in deliberations with realizing the resiliency of NV GEBE’s utility network. The intension is to have the balance of the overhead grid installed underground. This work will be executed over the 2.5 year period and consists of 136 projects. The 136 projects are the remaining streets that are still being fed via the overhead electrical network.

These projects will consist of the required trench works and utility installation for; Cables, Water lines, Fiber conduit and Street lights. Once completed (in 2023) all roads (Kadaster defined) will be lit creating a safe feeling for the people of Sint Maarten.

In 2019 the Police Force of Sint Maarten (KPSM) in partnership with VROMI and NV GEBE came to an agreement to install, what we have called, Community Safety Streetlights. These street lights are equipped with digital surveillance cameras which will allow the Camera Surveillance Center, which is operated and managed by KPSM, to monitor and operate these cameras in real time. This is to aid the KPSM to quickly identify and resolve any unlawful activities.

Dr. Sharine Daniel, Interim Manager of NV GEBE stated that the presence of adequate lighting acts both as a deterrent to criminals and also as an early warning system for potential victims. When it’s dark, people feel a heightened sense of anxiety. A brightly lit area generally makes us feel safer, which is the psychological effect of light. Good street lighting also is a benefit for commercial establishments because areas with adequate lighting feels more welcoming and safer to customers.

NV GEBE added that taking the Privacy Laws into account all images captured and gathered by these cameras for legal purposes will be managed and stored solely by KPSM at the Camera Surveillance Center and will fall totally under the responsibility of the Chief of Police.

Currently there are over 80 active Community Safety Streetlights installed island wide which will serves as part of the expansion of the present Camera Observation Project of the KPSM.

This will definitely serve as a great addition to the camera project which has proven to be very successful in the crime prevention on the island. The goal of NV GEBE is to provide clearer, more reliable and energy efficient streetlights for the entire community of Sint Maarten while KPSM will be able to monitor any illegal activities in those areas.

Interim Manager Distribution, ing. Patrick Drijvers stated that, Street lighting has changed how we live our lives, after the sun goes down. Though we take it for granted, it’s hard to imagine going out for a run after dark, or taking out the bike for a ride in the evening or taking a leisurely stroll after dinner without street lights.

The importance of proper street lighting is supported by many factors with the most important one being safety. One thing that comes to mind when we think about safety is the prevention of accidents. Poor visibility is a leading contributor to accidents, both because drivers cannot see where they are going, and because pedestrians have difficulty spotting oncoming traffic or roadside obstacles.

On Sint Maarten roadway lights are the main type of lighting used. Bright street lighting is a need for busy roads that see a lot of vehicular traffic. However, this is not limited to busy stretches side roads are equally in need of lighting. The light needs to spread over a wide distance so as to increase visibility for drivers and avoid accidents.

In order to enhance and maintain the visibility, the street lighting needs to be consistent and bright. Insufficient or inconsistent lighting in patches can cause accidents. Another thing to consider is the brightness. The lights shouldn’t be so bright that they cause glare. On the other hand they cannot be to dim either that they hamper visibility. Roadway lights should also be effective in intense weather conditions such as heavy rains and any other conditions that can degrade visibility.

As this project continues KPSM, VROMI and NV GEBE will work in close contact with each other to determine the areas for additional Community Safety Streetlight placement as this will definitely improve the safety and security in all communities on the island of Sint Maarten.

The addition and completion of the street light grid, NV GEBE is committed to fulfil one of the company’s strategic goal, otherwise known to the Management of NV GEBE as ensuring the safety of every citizen of this country, St. Maarten. 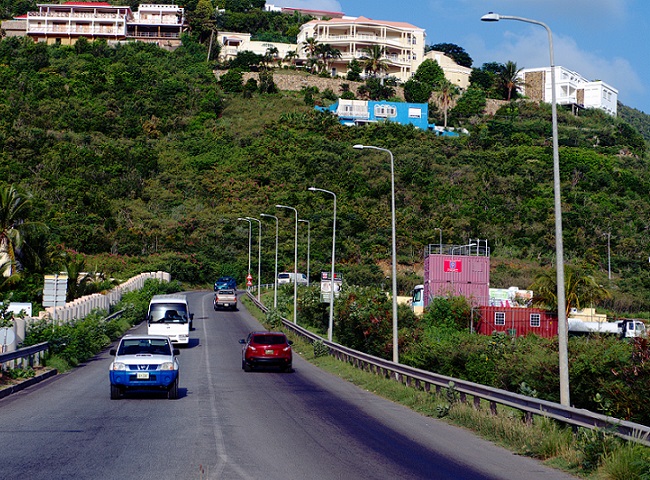