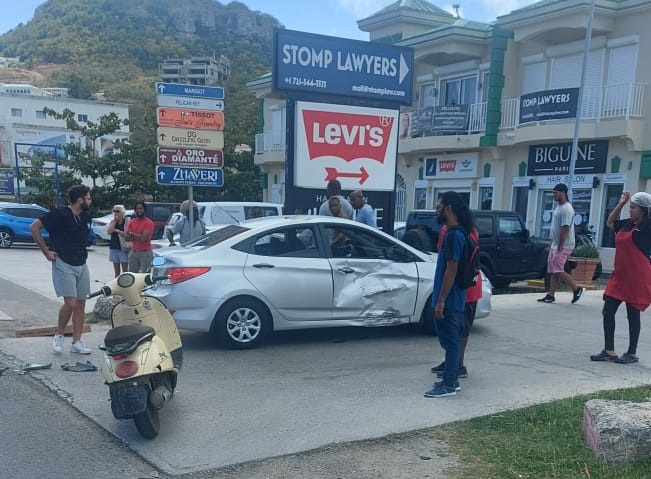 PHILIPSBURG, Sint Maarten (KPSM) — The Police Patrol and the traffic department was alerted to a serious traffic accident that had taken place today February 26th, 2021 around 01.15 pm, next to Kimsha Parking lot in Simpson Bay, whereby a rider of a cream-colored scooter was badly injured. On the scene the patrol encounters the rider with the initials D.S. who was suffering from severe lacerations to his face and legs and was complaining of pain.

According to the preliminary investigation by the traffic department, it appears that the driver of the gray Hyundai Accent was driving towards the Simpson Bay Bridge. At the same time, the rider of the motorbike was coming from the opposite direction on the welfare road. For reasons still unknown, the driver of the Hyundai accent decided to turn left and tried to enter the Kimsha parking lot.

The rider of the scooter was unable to brake in time and crashed into the side of the vehicle.

The rider of the bike who was not wearing a helmet was treated at the scene by the personnel of the ambulance and later rushed to the SMMC for treatment. The wounds of the victim were severe but not life-threatening.

The wearing of a helmet is to minimize the severity of head injuries in the event an accident occurs. The Sint Maarten Police Force is again urging all scooter or motorcycle riders and passengers to wear a helmet, while operating these vehicles, as required by law and for your own wellbeing.