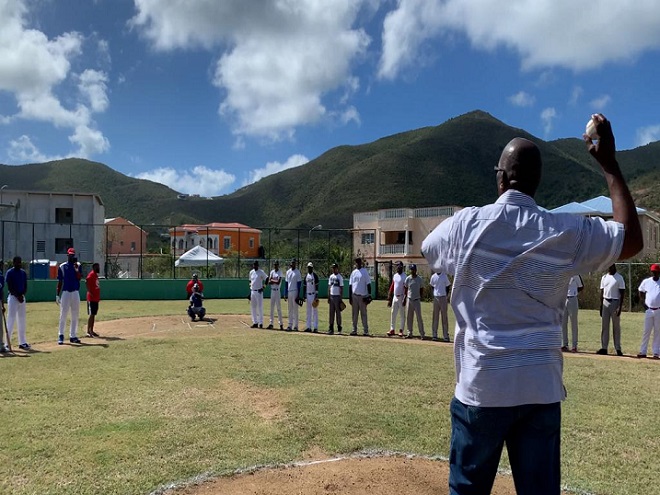 Philipsburg, Sint Maarten — Honorable Minister of Education, Culture, Youth and Sports drs. Rodolphe Samuel delivered the game two opening pitch on Saturday February 20, 2021 on the Belvedere ball park between 721 Elite and Hammer. 721 elite won against hammer 6-4.
This game was the second game in the Pelican League Championship series. The series started officially on Friday February 19, 2021 at the Little League Ballpark where the 721 elite faced the team Young Blue Jays, 721 elite won against young blue Jay’s 12-2,
Today Sunday February 21 the games continued at the Belvedere Ball field with The Hammers facing the Young Blue Jays , Hammers won Hammers won against young blue Jay’s 8 -5
The pelican league was established in 2021
There are four teams that will be playing in the series, Dimar Labega, President of Monster Factory Foundation is assisting The Pelican Baseball League with the promotion of the Championship Series. The vision is to have more teams participate and we encourage the community to get involved with assisting the league and it’s young players.