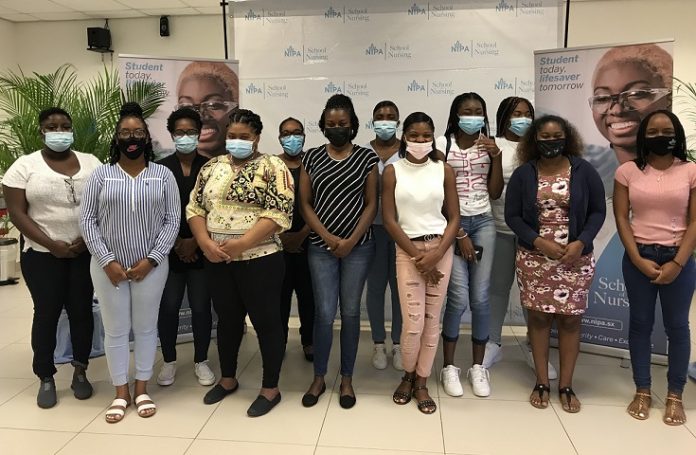 CAY HILL, Sint Maarten— National Institute for Professional Advancement (NIPA) is bringing in the new year on a positive note and hosted an opening ceremony yesterday, January 6, for the inaugural class of School of Nursing, the newly revamped nursing program.

NIPA has been working to restructure the former nursing program, which started in 2014 and proved to be an essential asset for NIPA and the future of St. Maarten’s medical force.

The overhaul is a direct result of last year’s partnership with American University of the Caribbean School of Medicine (AUC) and Chamberlain University, the largest nursing school in the United States.

The three entities signed a memorandum of understanding (MOU) in November 2019 to develop an Associate’s level degree program in Sint Maarten for the launch and overhauling of NIPA’s nursing program. The three institutes then signed a scope of service agreement in June 2020.

Yesterday’s opening ceremony marks the culmination of the planning phase to set these plans in motion. The Master of Ceremony was NIPA’s Job Coach Coordinator, Andrea Gibson-Paul, who opened with a rendition of the St. Maarten Song, followed by a brief invocation which was succeeded by speeches from Interim Director, Ian McIntosh and words from Damali Bryson, Change Manager.

The virtual service was streamed live on NIPA’s Facebook page, followed by an in-person orientation for the new class. Social distancing, sanitization stations and masks were enforced throughout the entire process to ensure safety.

In attendance were the future students; Denicio Richardson, Vice Chairperson of Advanced Vocational Education (AVE) Supervisory Board, and Board members, Oldine Bryson and Elroy Hughes. Also present were CMT Members, Deshawn David, Eudoxia Williams and Ian McIntosh. Valone Adams and Hazel Gonsalves were there to represent the nursing faculty.