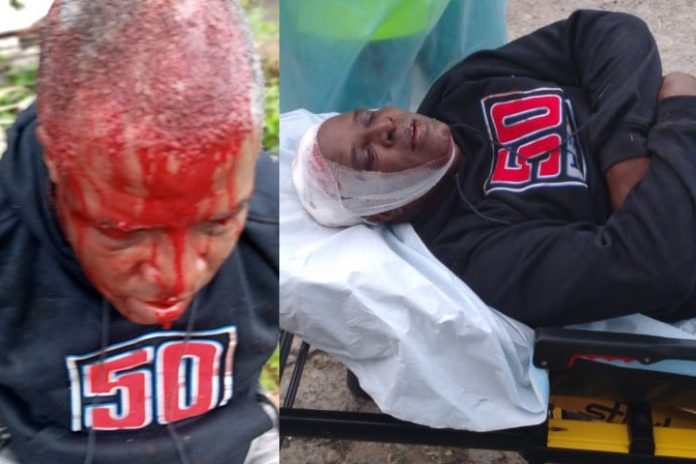 Photos was provided by family member who told 721news reporter:
The suspect words to my dad was : “I’m talking to u!” Today I’m going to kill!…. Today you will die ” … This is what he did (see picture)!

Below you can read the police report.

ST. PETERS, Sint Maarten — The central dispatch received several calls about a man being injured after fight on early Wednesday morning December 09th, 2020, around 07.00am, on the Marigot Hill road.

At the Marigot Hill Location the officers encountered a man with the initials G.O. sitting on the ground suffering from severe laceration to his head.

The Victim was treated on the scene by paramedics and rushed to the Sint Maarten Medical Center in serious condition. While the victim was being treated at the location on Marigot hill road, the man with initials A.D.B. (Dean Benjamin) appeared on the scene and informed the officers that he had fought with the victim and had ill-treated him with a stone.

He was immediately arrested without incident and brought to the police station in Philipsburg where he is being held for questioning.