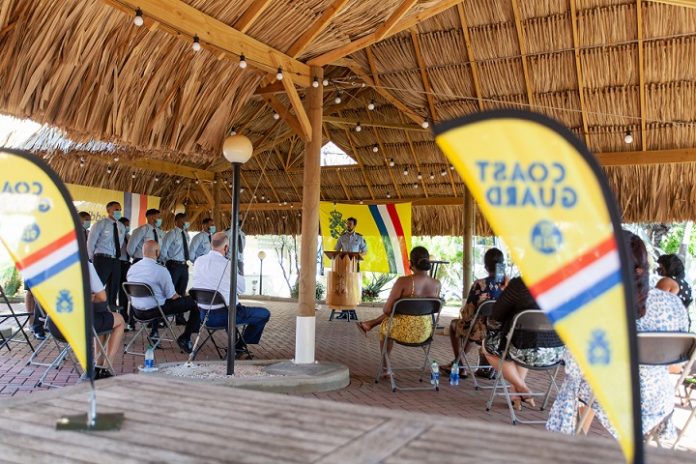 The ceremony was held for a small group due to the COVID-19 measures, consisting of a number of family members and a select group of colleagues from the Coast Guard. The new Coast Guard officers will carry out the Coast Guard duties at the Dutch Caribbean Coast Guard substations in Sint Maarten, Aruba and Curaçao together with their colleagues.

The youngsters started with the ‘Opleiding Caribische Politie en Kustwacht’ (OCPK) in March
2018. The OCPK was the previous training of the new ‘Basis Opleiding Kustwacht’ (BOK). The OCPK students together with their fellow students from the Dutch Caribbean Police Force (KPCN), have endured many physical, mental and theoretical challenges during the training.

After completing the police training at the KPCN, the youngsters followed a two-month nautical module for the Coast Guard. The nautical module teaches them to navigate, seaman skills and boarding on vessels.

During yesterday’s ceremony, the Caribbean team chief of the Dutch Police Academy, Rob
Appelhof, said in his speech that he is very proud to see nine Coast Guard officers follow and successfully finish the Police Academy training. “In spite of the sometimes difficult
circumstances and doubts, we have seen you all grow physically and mentally.

You shall make the team at the Coast Guard substations stronger, but do not forget to also
learn from your fellow Coast Guard colleagues. Congratulations and good luck ”.

The youngsters have been looking forward to this day for two years. After working hard and being away from their homes for a long time, it’s time to celebrate their achievement! The new Coast Guard officers will start in January 2021, at the substations in Aruba, Curaçao and Sint Maarten where they will be deployed at sea together with their team members.

The Dutch Caribbean Coast Guard wishes all the new officers good luck. Follow the Coast Guard’s Facebook and Instagram for more information about the next Coast Guard officer training ‘Basis Opleiding Kustwacht’ in 2021.