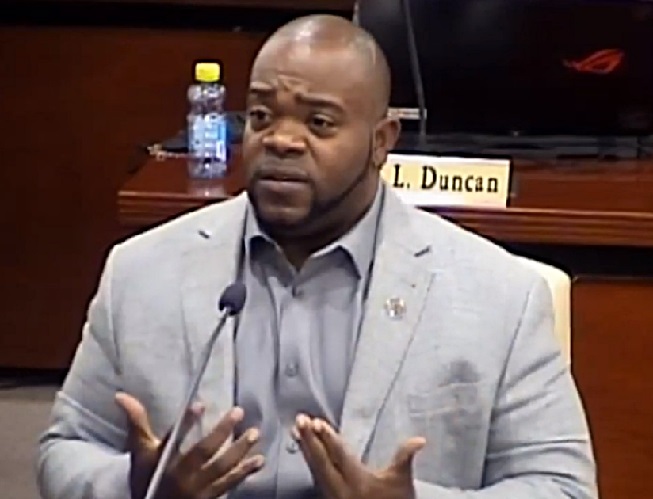 PHILIPSBURG, Sint Maarten — Independent Member of Parliament Christopher Emmanuel on Tuesday said that residents of St. Maarten should be prepared for an attack on their way of life and civil servants should not accept having their salaries cut across the board 12.5% for six or seven years to please State Secretary Knops who lives across the Atlantic and has an election to win in 2021.

MP Emmanuel minced no words in telling the public that their government is about to place a burden of suffering upon them the likes of which they have never known and make them dependent residents. He also decried the other financial cuts as unfair, unbearable and unacceptable.

The MP pointed out that the Dutch, with the assistance of the PM and her government, is taking aim specifically at the people. He said Saba, Statia and Bonaire are plagued by the same COVD-19 and economic downturns, but will not have to undergo any cuts. “The Governor cabinet who represents the Dutch will undergo not cuts, the Dutch representative will undergo no cuts, the OM (Prosecutor) office will undergo no cuts, the NRBP no cuts the salary of the CFO at the airport, a Dutch individual, no cuts. It is obvious that this is not about cuts it’s a realignment of our standard of living and this government has sold us out. They are penny wise and pound foolish,” the MP said.

The MP said not a single elected representative on St. Maarten can look civil servants in their eyes and tell them truthfully how long their salary cut will be in place. “But with the COHO being in place for six or seven years, civil servants can probably expect the cut to last for quite some time. I do not understand how any MP who supports the COHO can look themselves in the mirror or sleep at night knowing that they have made the lives of their people even more difficult for just a few pennies that will run out in a month,” MP Emmanuel said.

The MP on Monday told Parliament and the Prime Minister that he will not entertain any discussion about the so-called COHO and it will not get his support. “There are too many questions unanswered. We don’t even know what exactly the Prime Minister and her government have negotiated. What we do know is that the PM and Knops are taking money out of the pockets of civil servants and semi-public government entities. And for what? Civil servants and their unions should reject every aspect of this entity,” MP Emmanuel said.

He also added that Minister of Finance Adwell Irion has yet to answer questions about the true nature of government’s liquidity position. “And I don’t mean saying that it’s low or that we are running out of money. Give us details. What are the numbers. How much money do we have?  What is the status of our overdraft facilities? How long truthfully can we carry on without a measly 60 million from the Dutch. And above all, what happens when the 60 million is up? Will we be able then to carry ourselves all of a sudden?”

He continued: “So we will be giving away six or seven years to Dutch control for a month of support? All of the reforms we can execute ourselves just like we built back our country ourselves. The move to accept this entity shows extreme weakness and borders on cowardice,” MP Emmanuel said.

The MP said Knops simply wants to put a feather in his cap and say look, I have brought the Dutch Caribbean island to heal. “As for the Prime Minister and her government of weakness, they sold us out. And the PM was the first to proclaim that she will not be the PM to drag St. Maarten back into colonial days. Well guess what, congrats PM, you are exactly that PM. History will not judge you kindly,” the MP concluded.