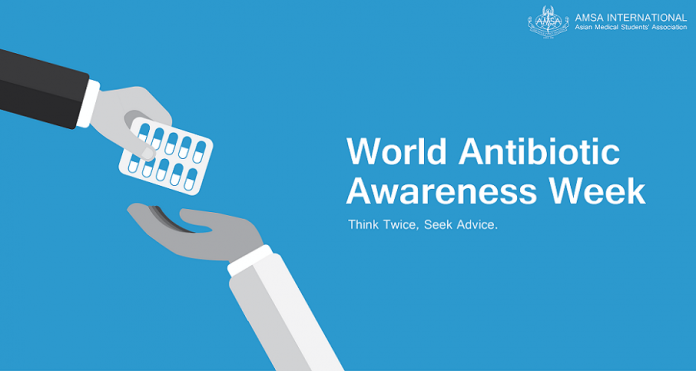 Antimicrobial Resistance (AMR) according to the Pan American Health Organization (PAHO) threatens the effective prevention and treatment of an ever-increasing range of infections caused by bacteria, parasites, viruses, and fungi.

Medicines become ineffective and infections persist in the body, increasing the risk of spread to others.

Without effective antibiotics, the success of major surgery and cancer chemotherapy would be compromised.

WAAW started on November 18 under the theme: “United to preserve antimicrobials.”

On November 24, the heads of the Food and Agriculture Organization of the United Nations (FAO), the World Organisation for Animal Health (OIE), and the World Health Organization (WHO), launched the new One Health Global Leaders Group on Antimicrobial Resistance.

WHO: The group will harness the leadership and influence of these world-renowned figures to catalyze global attention and action to preserve antimicrobial medicines and avert the disastrous consequences of antimicrobial resistance.

WHO: The group was created in response to a recommendation from the Interagency Coordination Group on Antimicrobial Resistance and supported by the Secretary-General of the United Nations.

The Collective Prevention Services (CPS) welcomes the aforementioned news and appeals to all stakeholders to continue to be attentive on the use of antibiotics, and to encourage best practices among the public, and health workers.

“Antimicrobial resistance happens when microorganisms (such as bacteria, fungi, viruses, and parasites) change when they are exposed to antimicrobial drugs (such as antibiotics, antifungals, antivirals, antimalarials, and anthelmintics),” PAHO reports.

Microorganisms that develop antimicrobial resistance is a global concern because new resistance mechanisms are emerging and spreading globally, threatening our ability to treat common infectious diseases, resulting in prolonged illness, disability, and death.