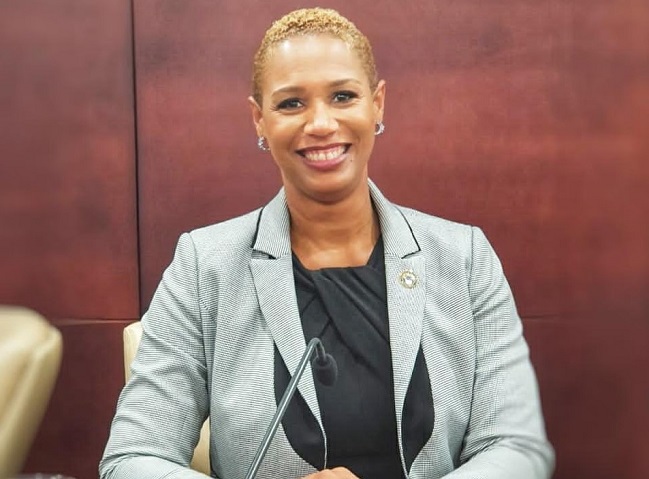 Philipsburg, Sint Maarten — The true essence of democracy must include resecting the rights of the people of the Country to elect whom they wish to serve as their leaders and government officials. So says Faction Leader in Parliament for the United People’s Party the honorable Grisha Heyliger-Marten who sang high praise for MP Christopher Emanuel of the National Alliance who was vindicated by the Court of Appeal for being wrongfully detained on October 22, 2019, by the Public Prosecutor’s Office.

Heyliger said on Friday, “It hurts that you have damaged the reputation of a son of the soil without any recourse. What happens to MP Emanuel now that the Prosecutor’s Office was proven wrong?” She also asked, “Who will give him back his good name in our country now that the Public Prosecutor’s office has dragged him and his family through the mud?”

“Today I proudly congratulate MP Emanuel on his victory. Congratulations must also go to the family and supporters of MP Emanuel. You have stood up with him throughout what could only be described as an unfair attack on his character and abuse of power aimed at marginalizing him,” stated MP Heyliger-Marten.

MP Heyliger told local media houses in a press statement on Friday that historically the people of St. Maarten were able to vote with confidence in the people they wanted to serve as leaders. Sadly, today despite the turnout at the Polls for political candidates, many are sidelined by the Public Prosecutor’s office amid claims, often unfounded, that the individuals are suddenly the subject of an investigation.

Heyliger-Marten is very familiar with the tactic as the Public Prosecutor’s Office prevented her husband former Member of Parliament Theodore Heyliger from becoming the Country’s second Prime Minister amidst claims of corruption which were later thrown out by the Court.

She said MP Emanuel’s vindication has not come without price that he and his family and friends have had to pay. Besides the enormous sums of money he has had to pay to fight for his life and freedom, the MP has suffered the embarrassment of being wrongfully detained and paraded before the world. The truth is that even institutions have shunned away from various political figures because of allegations made against them without any substantiated evidence.”

She is now questioning the system of the screening process for elected officials and appointed individuals in the community to assume certain positions of authority. She said, “The fact is the screening process has to be improved upon so that it is balanced. No one entity should have unrestricted rights to block the appointment of our people into positions of authority based solely on their opinion. If an individual has been charged with a crime, then they must step aside and allow the process to run its course. However, it cannot be right for you to suspect that anyone may have done something and use only that suspicion or hearsay to restrict anyone’s appointment to any office without substantiating your claim.

“The screening process has to be screened, and I will be looking at the process closely as Chairlady of the Justice Committee in Parliament.”

The honor that comes from being elected to office is robbed from too many of our people who after successfully passing all other stages are told that the Public Prosecutor’s Office holds up the process in the name of “some investigation.” In several cases, they take years refusing to say what individuals are under investigation for and block their appointment to office. This is an abuse of power and must not be allowed to continue.

It took my husband six years before he was acquitted of something he did not do. Who will give him back the six years of wrongfully accusing him and preventing him from serving his people?