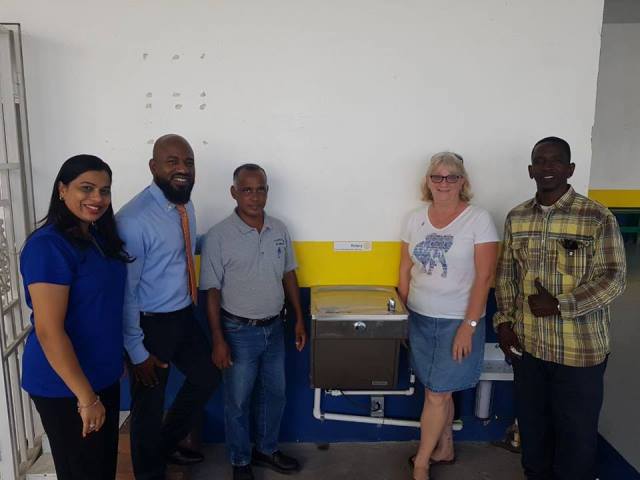 PHILIPSBURG, Sint Maarten — On World Water Day, March 22nd, 2016 the Rotary Club of St. Maarten-Mid Isle embarked on a project to ensure that clean drinking water was made available to all children at school.

It was found that some schools were lacking well-functioning coolers and some coolers were without filters, six schools participated in our ‘Water for Schools’ Project in 2016, under Special Projects Director Quincy Lont.   In 2017 Mid Isle did another inventory and found eighteen schools that did not have properly functioning water coolers.The Rotary Club of St. Maarten-Mid Isle looked for donations to cover expenses for the replacement and installation of new water coolers where necessary. In addition, as an extra precaution water filter installation were mounted to treat the drinking water prior to distribution to the water cooler systems.

The Rotary Club of St. Maarten-Mid Isle received an anonymous donation for the ‘Water for Schools’ project in memory of Jane Buncamper in 2017. The ‘Water for Schools’ project was officially launched on Monday March, 20th 2017 at the Marie Genevieve de Weever School, in Hope Estate, whereby a new water filter installation was installed under the supervision of Rotarian Tony da Cunha and water filters were changed at other schools.

Unfortunately, Hurricane Irma in September 2017 did a lot of damage to the water installations which caused a backlog in getting fresh drinking water into the schools during the course of 2018. Another inventory was done to see what water coolers needed repair or replacing etc.

Finally, in March, 2019 the Rotary Club of St. Maarten-Mid Isle restarted the ‘Water for Schools’ project by replacing the filters on the water coolers at the following primary schools: Marie Genevieve de Weever School, Sr. Borgia Primary School and St. Joseph Primary School. In the same week they also did inspections of the water cooler installations at Oranje School and Prins Willem Alexander School. From the inspections they learned that they need to replace the filters for the water coolers more often, i.e. every 3 months.

On World Water Day March 22, 2019, they officially presented a new water cooler to the Principal of St. Joseph Primary School, Mrs. Shaina Fernandes. This water cooler is an additional cooler which they had placed on their wish list for their school participating in the Scotiabank Rotary- Rotaract Spelling Bee 2018. Attending this presentation were the plumber, Mr. Raymond Alexander, The Rotary Club of St. Maarten-Mid-Isle President Mrs. Denise Antrobus and the Rotarians responsible for the project Tony da Cunha and Quincy Lont. The Water for Schools project will be ongoing for replacing/repairing damaged or missing water coolers and regularly replacing the filters in the schools, to provide the students with fresh drinking water.