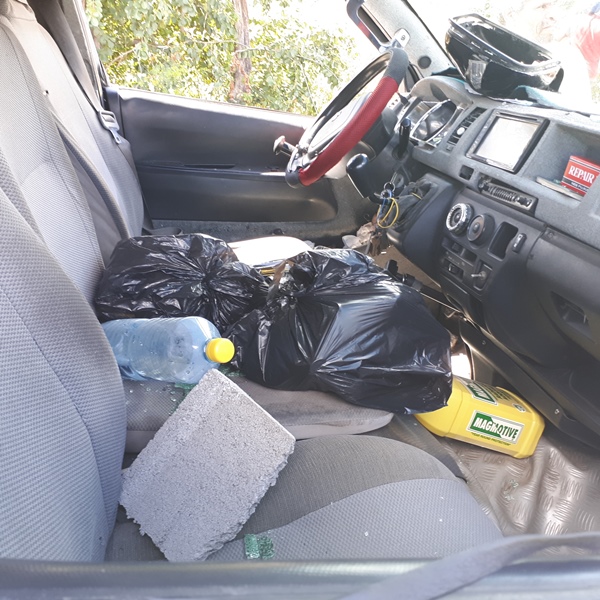 PHILIPSBURG, Sint Maarten (KPS) — The Sint Maarten Police Force is in need of the assistance of the community locating a white truck that was involved in a hit and run incident on Monday 11th March, in the vicinity of the Belvedere/ French Quarter boarder.

Reports received from the Traffic department stated that bus #160 was travelling on the Illidge road heading in the direction of French Quarter when a white truck carrying concrete blocks, travelling in the opposite direction began to lose its cargo. The concretes blocks which were not properly secured fell from the truck and damaged the bus. One of the concrete blocks landed on the seat of the driver through the driver’s side window of the bus barely missing the driver. The driver of the white truck continued driving without stopping to access the damages, leaving behind several concrete blocks on the road side.

The Traffic department is asking for driver of the white truck to come to the station or persons who were in the vicinity at the time of the accident to get in contact with Traffic Department as soon as possible by calling 542-2222 extension 241 or the Emergency Dispatch by dialing 911. 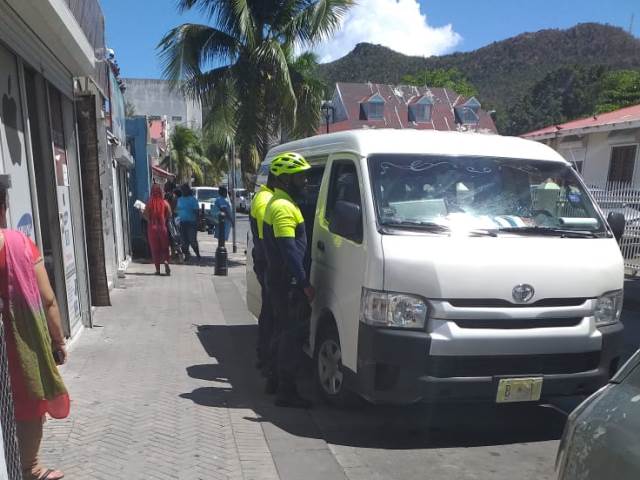 (KPS) — The KPSM’s Bike team joined forces with the control unit of Ministry of TEATT on Friday 08th March, to conduct controls in the Philipsburg vicinity. The control was geared toward checking the permits of busses and making sure they were in compliance with the road laws.

A total of 20 busses were stopped in the CA Cannegieter and the Back street area. Fines were given out by KPSM to bus drivers who did not stop passengers on the designated bus stop, who were not in possession of valid insurance as well as busses with tinted windows; owners had to remove the tint on the spot. TEATT also gave stern warning, as well as took note, of the bus drivers that were transporting passengers out of their permitted districts based on their permits and gave fines a few bus drivers that were operating without a first aid kit in their vehicle.