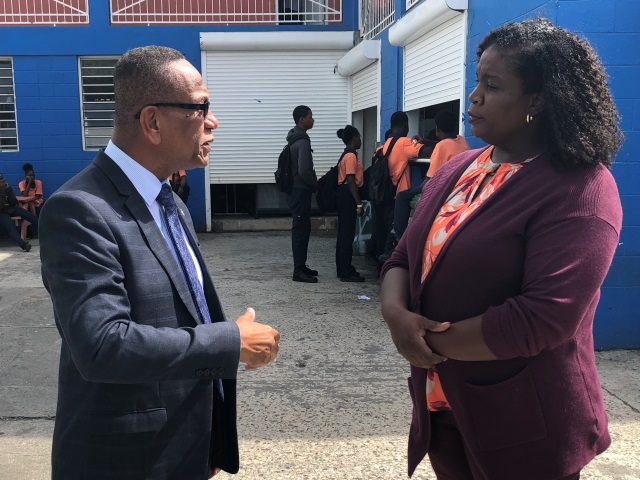 PHILIPSBURG, Sint Maarten — Minister of Education, Culture, Youth and Sport, Wycliffe Smith, visited the frustrated staff of the Sint Maarten Vocational Training School on Wednesday morning after a vehicle, owned by one of the teachers, was stolen by a student on Tuesday. The teachers stood in solidarity of their colleague as they decried the need for a safer school environment for both staff and students alike.

Minister Smith, along with Acting Secretary General, Shermina Powell-Richardson and Acting Head of the Division of Public Education, Marcelia Henry, listened to the teachers who expressed their concerns about the recent situation as well as the many occurrences of deviant student behavior in the past. The Minister promised to address the fears of the teachers starting by having extra security as of the following day. He also advised the teachers and staff that the education of all of the others students entrusted to them is important and therefore their cooperation to work together with the management to ensure a safe environment is very important. Minister Smith also promised that the fencing around the school would be fortified to ensure that students will only be able to enter through the front gate. “The safety of staff and students alike is of paramount importance,” said Smith.

Minister Smith was accompanied by his Cabinet Chief of staff, Peter J. Gittens, who also addressed students to get their feedback on their views of safety and learning at the public secondary school. The students gave valid insight of their home, community and school environs, and how they impact their learning.  As the Ministry of Education is actively working on a safe school plan that will be presented to Parliament, departments and divisions within the ministry are concurrently busy with the execution of different aspects of the plan.

According to Minister Smith, “The situation at the Sint Maarten Vocational Training School is one that has been neglected for too long, and now as a community, we must put all efforts together to correct the issues. At this point in time, this school needs a holistic, multi-faceted approach as the matters go beyond the scope of this ministry. I have already sought and received approval from the Prime Minister for the placement of two members of the Volunteer Korps at SMVTS daily.” This added security measure was in place as of Thursday, February 7, 2019, until further notice.

The minister also stated that for the improvement of the teaching-learning environment and the productivity of the school, all stakeholders must be involved for the change to take effect and to ensure the success that is desired by all. “To effectively overhaul the system that exists at this school, the participation of the Ministry, the management, teachers, staff, students and parents are vital. Just as important is the cooperation of the school bus drivers, the police officers, corporate partners, the Inspectorate of Education, and the community at large.” Minister Smith would also like to thank Minister Stuart Johnson who visited the school on Thursday as his replacement while he is in Curacao for the Vierlanden Overleg conference. Upon his return Minister Smith will be sitting with Minister De Weever to further discuss the way forward as it relates to Justice.

Reports have been received of students of the St. Maarten Vocational Training School seen loitering on the streets, during school hours. Some accounts reported that some of these students have been seen conducting criminal activity in different areas of the community. “We must unite and focus to make Sint Maarten Vocational Training School a place where we are happy to send our children. It takes a village to raise a child, and in this case, we need the village to help to redirect our youth. I am encouraging persons to look out for all school-aged children, encourage them to stay in school, and alert the authorities when there is reasonable suspicion of truancy or wrongdoing,” said Smith.

The right to quality education is one of the Sustainable Development Goals (SDGs) of the United Nations. According to the UNICEF Convention on the Rights of the Child, every child has a right to education. Children’s education should develop each child’s personality, talents and abilities to the fullest. As a signatory to the Memorandum of Understanding for all the countries with the Kingdom of the Netherlands to uphold these rights of children, Minister Smith is resolute in his commitment to see the turnaround of the Sint Maarten Vocational Training School and the general improvement of the image and reputation of the schools operated by the Department of Public Education.