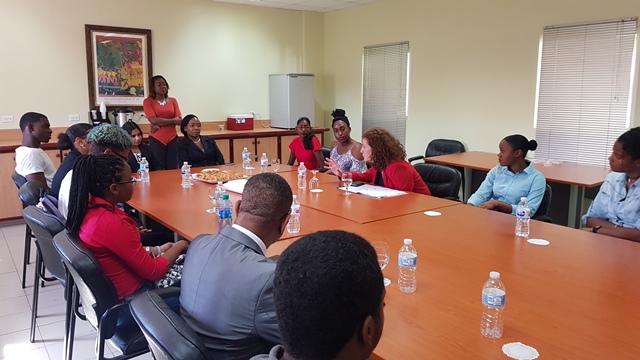 PHILIPSBURG, Sint Maarten — On Tuesday, 6 February, the University of St. Martin welcomed the Dutch Minister of Education, Culture and Science (OCW) Ingrid van Engelshoven during her visit to Sint Maarten earlier this week.

Accompanied by a delegation of ministerial functionaries and local government representatives, Engelshoven met with USM administration, students and faculty as part of her tour throughout the Caribbean and in preparation for a Kingdom-wide conference on the status of primary, secondary and higher Education to take place this Friday at Willemstad.

USM President Prof. Dr. Antonio Carmona Báez briefed the Dutch Minister on tertiary and higher education on the island St. Martin, demographics and student population, and the current hybrid system of accreditation presiding over the university’s degree programmes in Education, Business and Hospitality.

“Sometimes it is difficult for our counterparts in the Netherlands to understand how education is set up in the Caribbean part of the Dutch Kingdom, but it just takes a little openmindeness and a good sense of history. It looks like Engelshoven was ready to learn”, said President Carmona.  “We need accreditation equality within the Kingdom and more collaboration between the Dutch Ministry and local institutions in research”, he added.

Van Engelshoven, who hails from the centre-liberal D66 party, is a champion of diversity and gender issues, and is known to call for a dialogue on the Dutch concept of “emancipation”.

During their dialogue Carmona stated:

“Over 85% of our students are women, most are full time workers while also studying full time; they are either Afro-Caribbean or Asian-Caribbean, some of them mothers, many come from low-income families and struggling to make ends meet. Yes emancipation means something very different here than in Holland!”, said Dr. Carmona.

Engelshoven admitted that gender representation was “also a serious problem” in Dutch academia and has “a long way to go.”

Ten students representing Pre-USM, GED and Associate and Bachelor Degree programmes also met with the Dutch delegation and spent close to an hour in detailed conversation with Minister van Engelshoven. Topics covered included credit transfers to Dutch institutions, help needed for St. Martiners furthering their studies in the Netherlands, and the need for more teachers of the Dutch language in USM teacher training programmes.

Also present at the meeting at USM were Minister Wycliff Smith (MECYS), Secretary-General Shermina Powell-Richardson, and Head of the Department of Education Sidonia-Lacorbiniere.