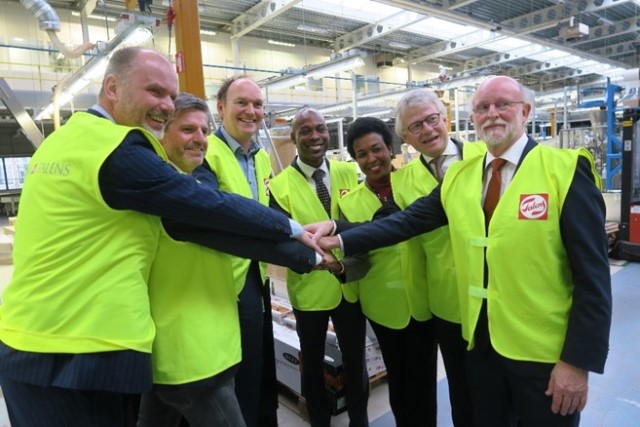 THE NETHERLANDS — Royal Talens, has been inspiring and stimulating creative expression worldwide for over 100 years. The Royal Talens Foundation believes that creative expression is essential for everyone’s personal development and therefore contributes to a social better world. The Foundation in living up to its beliefs ad holistic approach donates goods and materials to countries across the globe, where the need is greatest.

This time it was Apeldoorn. The General Director of Talens, said that even though not being actively involved in the initial phase of the project, that after having read the proposal, he thought it only fitting to have Talens be a part of the recovery and assistance process on the island of Sint Maarten. Giving back and actively encouraging development in the field of arts and craft , this is what we are about he stated. We have seen how donations like this has helped children cope with their trauma’s and I believe the same goes for St. Maarten. Creative expression brings people together, it stimulates conversation and it reduces conflicts where there are conflicts. We see this every day and that is the real goal of the Royal Talens Foundation.

Two pallets of goods consisting of 300 kilo of paint, easels, canvases, starter sets and mixing trays donated by The Box Blikken. Royal Talens expressed the hope that the goods will find a good destination and purpose, where the youth in particular will have joy working with them in creating fine artwork pieces and that it will not only help with the recovery of St. Maarten but also with the cultivation of experiences through the expression in art forms using paint.

The Mayor of Apeldoorn Mr. John Berends affirmed what was spoken by the director of Talens  and was moved by what he had seen during the official handover. The Mayor of Apeldoorn stated that it is good to see that we can work together and support one another in good and not so good times. He further expressed his  admiration for  the resilience of the people of St. Maarten through Deputy Minister Somersall. He wished Minister Somersall much strength and told him that the people in the Caribbean has a special place in his heart.  Deputy Minister Somersall thanked all for their contribution and continued support to the people of St. Maarten.

Deputy Minister Somersall, further thanked NIA, Tess Verheij and all the unseen stakeholders on St. Maarten who are helping the children and others cope with their trauma after the passing of hurricanes Irma and Maria. Honoring SMCP pledge to the people of giving back from their salaries, the transport and shipping of the goods to St. Maarten was donated by Deputy Minister Plenipotentiary Michael Somersall. We hope that this donation be utilized in a proper, transparent and efficient manner benefitting many, and growing Sint Maarten even larger in the area of cultural expressions through Art.