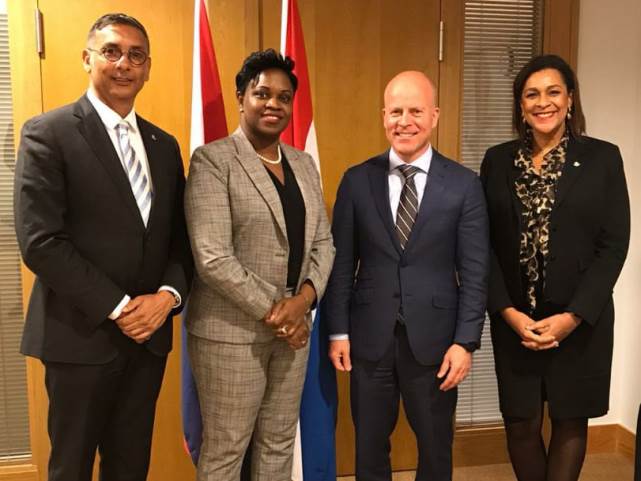 PHILIPSBURG – Last week, Prime Minister Leona Romeo-Marlin and Minister of Finance Perry Geerlings travelled to the Netherlands to successfully negotiate and secure a bridge loan amounting up to 15 million US dollars to ensure that the airport can continue to pay its salaries and fulfil its other financial obligations in the coming months.

This financial assistance was urgently requested by the airport and is linked with the 100 million US dollars that the Council of Ministers has secured for the reconstruction of the airport through the World Bank and the European Investment Bank. Upon her return from the Netherlands, Prime Minister Romeo-Marlin thanked State Secretary Raymond Knops, the Council of Ministers, PJIAH and PJIAE for their cooperation and swift action.

“I want to let the public know, on Thursday, PJIAH and PJIAE informed the Council of Ministers that they have accepted the proposal for financial assistance by the World Bank and the European Investment Bank under the conditions set by the Netherlands. In the absence of any alternative financing, the airport needed immediate financial assistance to ensure the continuation of its operations. Without this assistance, the airport would not able to pay salaries at the end of this month, jobs would be lost and employees could no longer take care of families.

I’m grateful that all parties recognized the urgency of the situation and took the necessary action to protect the interests of the people and businesses of Sint Maarten as we all are aware that the airport is the gateway to Sint Maarten’s economy,” Prime Minister Romeo-Marlin stated. On January 8, the Council of Ministers unanimously agreed to approve the proposal for financial assistance to the airport by the World Bank and the European Investment Bank.

Under this proposal, 50 million US dollars will be provided as a grant from the World Bank Trust Fund to the Government of Sint Maarten, which will be lent to the airport under favorable conditions. An additional 50 million US dollars will be become available as a loan through the European Investment Bank. The Council of Ministers expressed support for this proposal when they learnt that a more favorable deal was hard to come by and upon receiving information from the airport that no other financing would become available through Piper Jaffray or other sources any time soon.

The Netherlands, as the donor of the World Bank Trust Fund, has made the approval of the airport financing by the Steering Committee conditional on the completion of an integrity check of the airport, a corporate governance risk assessment and follow up thereof on attracting international expertise to fill a temporary position in the supervisory board of the Holding Company and a temporary position as member of the board of directors of PJIAE for a maximum of two years.

State Secretary Knops has confirmed that the Netherlands does not want to take over the airport Cabinet of the Prime Minister Leona Romeo-Marlin The Government of Sint Maarten and that the new positions are only required to strengthen the capacity of the airport throughout the reconstruction process. Upon receiving the assurance that the new general management positions in PJIAH and PJIAE will only be temporary and that Sint Maarten and the Netherlands shall mutually agree upon the selection of individual candidates, the Council of Ministers, PJIAH and PJIAE have agreed to accept the conditions. During her working visit to The Netherlands, Prime Minister Romeo-Marlin met with Prime Minister Mark Rutte to discuss all matters in general. Minister of Finance joined Prime Minister Romeo Marlin when she met with State Secretary Raymond Knops and the Schiphol Airport Group to discuss the details of the financial assistance and the conditions of the Netherlands. A key point in the discussions was the position as member of the board of directors of PJIAE.

“The Council of Ministers was only willing to accept this condition if the position in the board of directors would be temporary in nature to support the existing management with the reconstruction of the airport and only if the final candidate shall be mutually agreed upon by Sint Maarten and the Netherlands. This was accepted by the Netherlands. Together with Schiphol and Princess Juliana International Airport, the Government will now look for a candidate with experience in civil aviation and the (re)building of airports. The potential candidate does not have to be a Dutch national or someone presently working for Schiphol Airport. The Council of Ministers has full confidence in the existing management, who will remain fully responsible for the Airport’s day to day operations. The temporary position as member of the board of directors could assist PJIAE in getting the terminal fully up and running again in the fastest possible timeframe,” Prime Minister Romeo-Marlin stated on Sunday.

On Monday, the Prime Minister Romeo Marlin will address Parliament on the decision of the Council of Ministers to express support for the proposal for financial assistance to the airport through the World Bank and the European Investment Bank. Following the emergency meeting of Parliament, the Minister of Finance and the Minister of TEATT will formalize the 15 million US dollar bridge loan with the Netherlands.

To ensure that the airport receives the first tranche of 5 million US dollars as soon as technically possible, the Minister of Finance has already prepared an emergency loan agreement between the Government, PJIAH and PJIAE. The 5 million US dollars is critical for the airport to cover payroll for January and meet its obligations to the bond holders.

These funds will be reimbursed to Government once the 100 million US dollars from the Trust Fund and the European Investment Bank has been received.