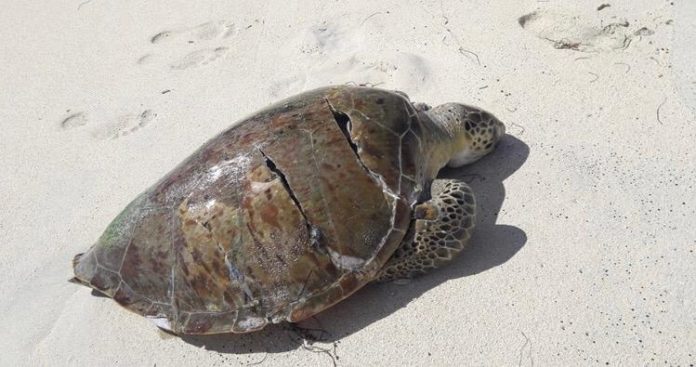 “Over the past few weeks we have been seeing issues pertaining to boats speeding in zones where they should not causing damage to wildlife. Last week a turtle washed ashore after a boat hit its shell and it was killed. The speed limits in the Simpson Bay Lagoon and in nearshore areas are in place to also protect wildlife,” commented Bervoets.

In the bridge channel, fareways and in the Lagoon a five mile per hour speed limit is in force for all vessels. Anchorage zones and marinas fall under “no wake zones.”

No anchorage is allowed in the fare ways. The access fare way from sea to the bridge channel should always stay open. The inbound traffic should position their vessels alongside the fare way so the outbound traffic has free passage to sea. East of the Princess Juliana International Airport, in the extension of the runway in the lagoon, is a no anchorage area.

Photocaption: Sea Turtle Killed after being hit by a boat