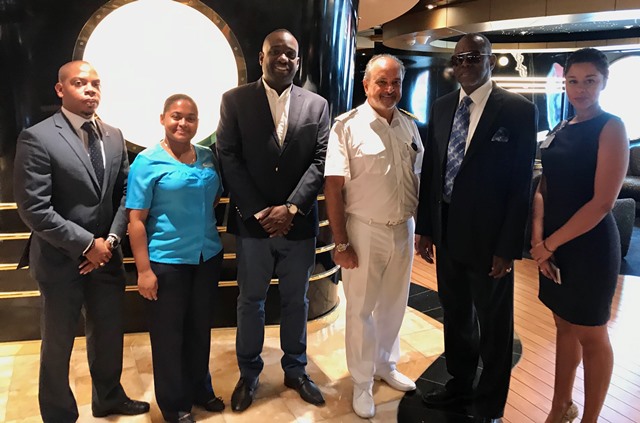 PORT ST. MAARTEN – MSC Preziosa made its inaugural call on Wednesday, January 2nd – the first for the New Year – and was welcomed by Port St. Maarten and St. Maarten Tourist Bureau representatives where the official plaque and welcome pleasantries were exchanged.

The Captain mentioned that St. Maarten is one of his preferred destinations and has been coming to the island on various ships within the MSC fleet.

The other three Fantasia Class ships are: MSC Divina (2012), MSC Splendida (2009) and MSC Fantasia (2008) – are large-size and modern ships. MSC Preziosa has been ranked among the five best cruise ships in the world.

MSC Cruises, is a Swiss-based and is considered the world’s largest privately-owned cruise line.  The company, which grew by 800% since 2004, carried two million guests in 2017 and reported strong financial results with a turnover of $2.2 billion.

MSC Cruises has deep Mediterranean roots employing over 23,700 staff globally and selling cruise vacations in 70 countries around the world.

MSC Cruises’ 15 ships boast a host of cutting-edge innovations and the latest technologies, and its global fleet is one of the youngest at sea. The fleet was born of a €6 bn investment program launched in 2003 and after successful completion of the first investment phase, the Company launched a second phase investment worth €11.6 bn that will see the fleet expand to 25 mega-cruise ships by 2026. MSC Cruises is the first global cruise line brand to develop an investment plan of such length and magnitude, according to company information.

MSC Cruises is the cruise line with the highest passenger capacity on order. An additional ten cruise ships are due to join its’ fleet by 2026. In addition to the upcoming four Meraviglia and two Seaside ships, these will include four World Class vessels. With 205,000 GT and capacity for 6,761 guests, this new class of cruise ships will bring a new generation of LNG-powered engines that will strongly minimize their environmental footprint.

PHOTO CUTLINE: Representatives of Port St. Maarten and the Captain of MSC Preziosa.