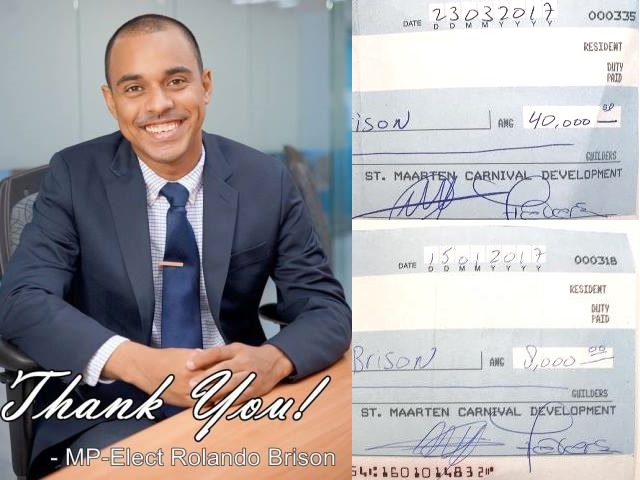 PHILIPSBURG, Sint Maarten – The money dealings of Member of Parliament Rolando Brison of the United St. Maarten Party are again raising eyebrows. This time a stack of checks written out to him by the St. Maarten Carnival Development Foundation (SCDF) totaling NAf 113,000 (more than US $67,000) is at centre-stage.

The MP collected the monies between April 2016 and April 2017 and these are reportedly for “promotion” work he carried out for the foundation. What is telling is some payments were issued at the time Brison was interim head of the St. Maarten Tourist Bureau. The bureau is one of the government department not only charged with promoting the country, but with giving advice on the subsidy the Carnival Foundation gets from government.

All of the checks, except one, show what the payments are supposedly for. “Streaming” is scribbled on one of the Bank of Nova Scotia checks. The “For” lines on the other checks are blank.

The first of six checks, issued on April 14, 2016, amounted to NAf 36,000. The next check was issued a day later on April 15, 2016, for NAf 10,000. Both checks bear the same two signatures of Carnival Foundation members. The checks were issued in Brison’s name, and not to a company, establishing that he had a direct business relation with SCDF. The checks, which 721 News has copies of, were written directly to Brison and not via a company.

In February 2017, Brison was appointed interim tourism director by then-interim Minister of Tourism Raphael Boasman. To be considered for his new position, Brison had to resign his legal claim as Director of STA.

Brison’s appointed positions in 2016 and 2017 bring him in a difficult spot to continue or to start any private business relationship with SCDF a foundation that receives subsidy from government, a subsidy that comes out from the budget of the Ministry of TEATT for strictly promotion of St. Maarten Carnival.

For the past few years, the seemingly strange deals and movements within SCDF have raise concern from different people in the community and on social media demanding that SOAB and General Audit Chamber to step in to check the foundation’s books. After all, the foundation is given public monies.

It is a public secret that Brison was supposedly handling the marketing of SCDF including the livestream section and negotiation of an exclusive deal with a liquor company for marketing and selling of their product during the Carnival season. The question is Did he truly do work amounting to such big sums for SCDF and is there proof of this work?

The even more questionable part is him getting money after he was appointed to government posts. If he paid taxes by declaring this additional income is also questionable as is if he is still doing work for SCDF and collecting funds now. Another huge question is why Brison did not funnel the money for SCDF via a company and not to himself. Is it because it is harder to track payments to individuals than to companies?

The whole checks saga begs the question is some of the payout was for helping SCDF got its subsidy. Can the payouts be considered a bribe? Many people are asking questions about the operations of SCDF and if the foundation is truly working on carnival or is a cash cow of some of its members.

The SCDF checks is not Brison’s only shady deal. He has had money issues at Winair where he is supposed to repay thousands of dollars he took to avoid jail. He has skipped out on his rent owed to landlords prior to becoming an MP. He recently had to make a last-minute payment to the Routes Conference after he failed to pay out money government gave him when he was tourist office head to pay for a routes training course. He paid up only after the non-payment was a public issue.

UPDATE: MP Rolando Brison give a statement on this article via a FB live stream.