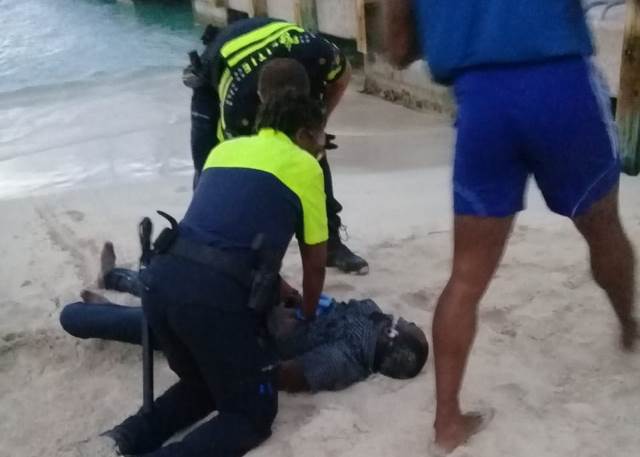 GREAT BAY, Sint Maarten (KPS) — On Thursday January 17th at approximately 06.45 a.m. a security guard on duty in the vicinity of Walter Plantz Pier in Philipsburg called the Emergency Dispatch informing them that he had located a body drifting near the pier and was not showing any signs of life.

Immediately several police patrols, Detectives and paramedics were sent to the scene to investigate what had taken place. On the scene the body was brought to shore by one of the officers. An attempt to revive the victim did not have any positive results.

The victim was later identified with initials N.A.K. (30) from Guyana and was known as mentally challenged person. Dr. Mercuur who arrived on the scene pronounced the death of the victim and the stated that the cause of death was drowning.

The investigating officers did not find any indication that would suggest that foul play had taken place. The body of the victim was taken to a morgue.

This morning around 6:40 am a Great Bay beach visitor help pull a lifeless body of a man out of the water. It is believe that he may have drown.

The police are busy investigating the real cause of his death and the identity of this man.