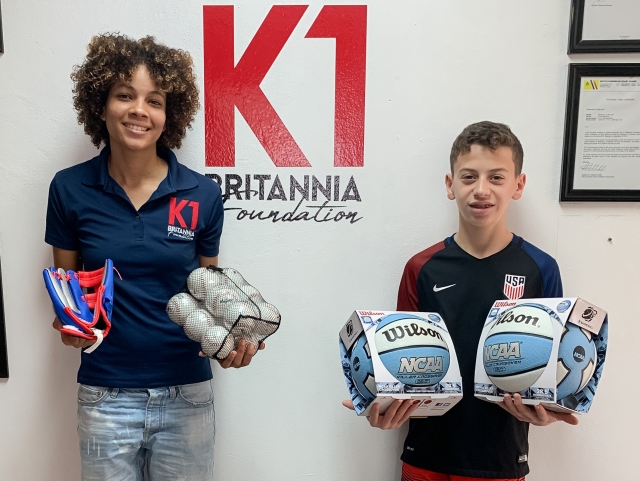 PHILIPSBURG – The K1 Britannia Foundation recently received a thoughtful donation of sports equipment from a New Jersey family currently visiting St. Maarten. The Brown family has been coming to St. Maarten for over 43 years and wanted to help the island after hearing about Hurricane Irma. Jacob Brown, the family’s 13-year-old, initiated the fundraising idea and sought to find ways to send aid to children in need on the island.

Through Marvio Cook’s recommendation to the family about K1, the Browns created an Amazon wish list and collected over 60 pieces of sports equipment in 4 months. The family travelled with two large suitcases filled with the equipment and stopped by the K1 office to donate the sports gear which included baseball gloves, nets, basketballs, soccer balls and many more.

Explaining the idea of the donation, Jacob stated, “I wanted to collect sports equipment because I have been coming to St. Maarten for 13 years. I thought I owed it to the island to give something back after Hurricane Irma’s devastation. I realized buildings were going to be rebuilt but I was concerned of the kids’ welfare. I wanted to give something so they could have a chance to be kids again. I chose K1 Britannia after hearing of the good work they had been doing in the island.”

“We are truly touched by Jacob’s efforts in wanting to contribute to St. Maarten. He is an example to follow, and K1 is privileged to have been able to collaborate with and get to know such kind-hearted persons.” stated K1 Communications Manager, Tanvi Goklani.

K1 Britannia Foundation will share these sport items to foster children, children at afternoon schools such as Player Development SXM and sport organizations.

“Since the passing of hurricane Irma in 2017, K1 has seen the generosity and love from international individuals, families and organizations who have organized various forms of fundraisings for funds as well as school supplies and now sports equipment for K1 and the St. Maarten community. We are grateful and appreciative of the role the international community has played in helping St. Maarten bounce back after Irma.” concluded Chiaira Bowers, Program Manager at K1 Britannia Foundation.