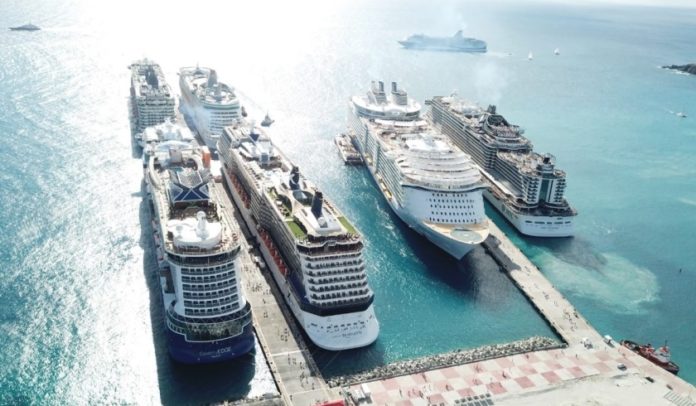 PORT ST. MAARTEN – Boxing Day was the busiest cruise ship day of the 2018 cruise season as the destination welcomed seven cruise ships in port.  Six vessels were moored at the two cruise piers at the Dr. A.C. Wathey Cruise & Cargo Facility while one was at anchor in Great Bay.

Port St. Maarten Management were elated with the number of passengers and crew as 2018 comes to an end.

The vessels that visited the destination on Wednesday were: Adventure of the Seas, Marella Explorer, MSC Seaside, Celebrity Edge, MV Britannia, Celebrity Silhouette, and Harmony of the Seas.

Three of the vessels will remain in port until 9.00pm and 11.00pm.  These vessels are Celebrity Edge, Celebrity Silhouette and Marella Explorer, which combined has approximately 11,500 cruise passengers and crew who have the opportunity to sample some of the nightlife activities in Philipsburg and along the Beach Promenade.

Celebrity Edge, which made its inaugural call last week has been described as the new home of modern luxury cruising and is the first of the Edge-class cruise ships.

Celebrity Cruises said the new ship is poised to change the way guests experience the world.  With its visionary design, it will raise the bar on cruise vacations to even greater heights.

Additional Edge-class vessels will join the sister ship in 2020, the Celebrity Apex, and two additional ships in the Edge Series will follow in 2021 and 2022.

MSC Cruises Seaside which made its inaugural call in the first half of the year was also in port.  MSC Seaside, which is part of the new Seaside Class described by MSC as a game changer, features a promenade with shops, restaurants and bars and much more.

The vessel is a completely new prototype pushing the boundaries of innovative ship building and design.

Port St. Maarten Management pointed out that with seven ships in port, they carry close to 10,000 crew members onboard who also play a crucial role in the economic recovery of the destination as past surveys have shown how they make a considerable contribution to the economy of the country.

St. Maarten has in the past received high marks from cruise passenger and crew surveys. According to the BREA (Business Research & Economic Advisors) Report, which is a survey-based analysis of the impacts of passenger, crew and cruise line spending, that was prepared for the Florida Caribbean Cruise Association (FCCA) and Participating Destinations, October 2015 edition, destination St. Maarten led all destinations with nearly US$423 million in cruise passenger spending for the 2014/15 cruise season.

In St. Maarten crew expenditures were concentrated on retail purchases of electronics and jewelry. These were followed by spending for food and beverages and clothing. These four categories accounted for 70 percent of total crew spending in St. Maarten.

“Being hospitable to our guests and always displaying that ‘Friendly Island’ smile that they have become accustomed too, will continue to move cruise tourism and the destination forward,” Port St. Maarten Management said on Wednesday.