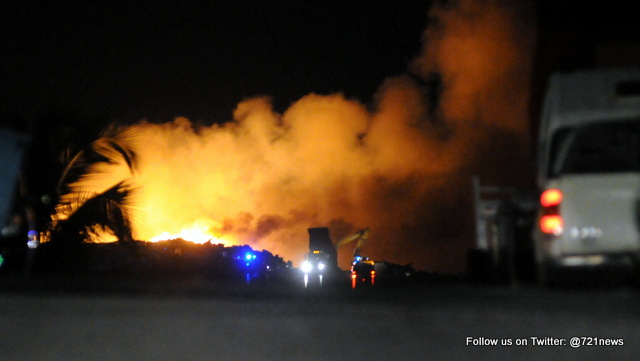 WASHINGTON — A baseline screening of smoke from subsurface fires at the Pond Island municipal and hurricane waste disposal sites was released today by the World Bank. The screening showed that several air pollutants emitted from subsurface fires exceeded international occupational exposure limits within the perimeter of the dumpsite. These results were expected as the majority of samples which exceeded limits were collected in the smoke where the concentration of emissions is high. The baseline screening recommends new health and safety protection measures for people active on the dumpsites.

The purpose of this baseline assessment was to identify the chemical composition of the smoke in preparation for fire suppression operations. These are to be undertaken through the Emergency Debris Management Project financed by the Sint Maarten Irma construction, Recovery, and Resilience Trust Fund funded by the government of the Netherlands. For that purpose, the assessment was conducted on the dumpsites only.

Based on the results of the screening, appropriate occupational health and safety measures have been identified to ensure the protection of workers at the site. The Government of Sint Maarten will put these in place, with the support of the World Bank. The Grant Agreement for the Emergency Debris Management Project, which, among other activities aims to extinguish the subsurface fires at the dumpsite while controlling the impacts on the environment and the population, is scheduled to be signed next week and subsequently rolled out. Equipment is currently being procured to help improve landfill management and better control the fires.

As an immediate measure, the Government of Sint Maarten will restrict access to the waste sites to authorized personnel and workers only and will equip them with appropriate protective gear. In addition, to assess the risk to neighboring communities, air quality measurements will be carried out by the National Institute for Public Health and the Environment of the Netherlands (Rijksinstituut voor Volksgezondheid en Milieu, RIVM) in January 2019. Further air quality monitoring will follow under the Emergency Debris Management Project before, during and after the planned fire suppression operations.