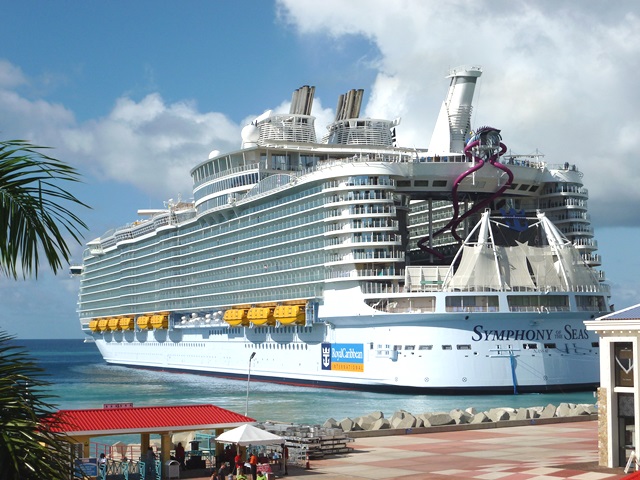 PORT ST. MAARTEN – Bolder and bigger, that is how Royal Caribbean International (RCI) Oasis Class ships have been described.  Harmony, Allure and Oasis, the world’s largest cruise ships are well known, but on November 27, Symphony of the Seas, the new addition to the Royal Caribbean fleet made its inaugural call to Port St. Maarten.

Minister of Tourism & Economic Affairs Stuart Johnson led a delegation on-board to welcome the ship.  This was the ships first port of call in the eastern Caribbean after leaving Miami with 6054 passengers on-board and a complement of 2200 crew.

Captain Rob Hempstead said during the official welcome and plaque exchange ceremony that it was nice to be back in St. Maarten, and that it was a pleasure and honor to bring in the flag ship of the RCI fleet.

Captain Hempstead said he was glad to see the quick rebound and rebuilding effort of the destination and thanked the St. Maarten people for all their hard work as this was his favorite port in the eastern Caribbean.

Minister Johnson during the ceremony called for a round of applause for Captain Rob Hempstead, and thanked RCI for its confidence in the destination and that it was testimony to the resilience of the people of St. Maarten in getting the destination back on track.

The Minister also applauded the hard work of the Port St. Maarten board and management team in bringing back cruise tourism to the destination which is a significant part of the national economy.

“I am elated to be here for this inaugural call.  This is indeed another milestone for the port and the destination overall.  I take this opportunity to congratulate everybody as we continue to propel our island forward to new frontiers,” Minister Stuart Johnson said on Tuesday during the inaugural call ceremony of Symphony of the Seas.

“It was an honor once again as a port and as a destination to welcome RCIs latest Oasis class vessel.  We have been working tirelessly over the past 13-months to assure we continue to move forward as a marquee port of call.

“The future within the cruise industry is promising as more ships come online and are deployed to the Caribbean. As a cruise destination, we must continue to push in re-inventing and upgrading our product offerings more so now than ever which will translate into increased demand to “Rediscover” St. Maarten.

“We commend the community and private sector for their continued dedication and resilience 13-months after Irma and Maria, and we must continue the drive to keep pushing in building back better our island destination as cruise passengers rediscover the ‘Friendly Island’,” Port St. Maarten Management said on Tuesday.

Six cruise ships with approximately 20,000 cruise passengers and crew will be visiting the destination on Wednesday, November 28, the second six-ship day of the 2018-2019 cruise season.

The vessels that will be in port are: Adventure of the Seas, Carnival Pride, Marella Explorer, MSC Seaside, Norwegian Dawn, and Star Pride.

Port St. Maarten Management is calling on all stakeholders and the community to give the cruise ship guests a warm Sint Maarten ‘cruise’ holiday welcome and smile.

Symphony of the Seas debuted in April for her inaugural season in Europe (Mediterranean).  Beginning November 24, Symphony of the Seas started home porting out of Miami, Florida, her year-round home, sailing seven night Eastern and Western Caribbean voyages.

The 25th ship in Royal Caribbean’s fleet spans 16 guest decks and has a registered gross tonnage of 230,000; features 2,759 staterooms for 5,500 guests at double occupancy.

According to RCI, Symphony of the Seas, “…brings together the award-winning and acclaimed features only found on Royal Caribbean, with distinct new experiences that will continue to inspire adventure among guests of all ages. New dining concepts and family activities, awe-inspiring theater, aerial, ice and aqua entertainment, and the most dynamic suite in family travel will join the lineup of Royal Caribbean exclusives – such as the robot bartenders at the Bionic Bar, powered by Makr Shakr; the iconic AquaTheater showcasing unrivaled high-flying, high-diving performances; and the Ultimate Abyss, the tallest slide at sea – for a thrilling crescendo of diverse experiences, all set in the unique seven-neighborhood concept of the award-winning Oasis-class ships.”

Royal Caribbean International sails 24 of the world’s most innovative cruise ships to the most popular destinations in Bermuda and the Caribbean, Europe, Canada and New England, Alaska, South America, Asia, and Australia and New Zealand.

PHOTO CUTLINE: Group photo after the plaque exchange for the inaugural call of Symphony of the Seas, with the St. Maarten delegation led by Minister of Tourism Affairs Stuart Johnson (1st right) and Captain Rob Hempstead.